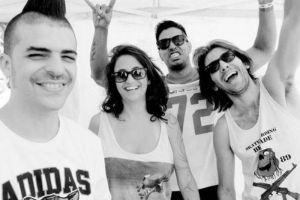 After their formation, they released their first LP in 2007, called Inhuman, which was released in Chile via Ganja Records and worldwide via No Fun Records. The first album gave them enough recognition to go on an European tour. The album is sung in English.

In 2010, they released their second LP called Freak. In 2011, they performed at Personal Fest and Cosquín Rock festivals in Argentina, opening for The Cult. The album was also sung in English.

In 2012, they recorded their third LP called Trastornados in just two months. The album marked the band starting to break away from the underground scene. The album also brought them an award for the best album production of the year at Premios Gardel 2013 awards. The band was also invited to open for The Cure on the River Plate Stadium and Guns N Roses on the Ciudad de La Plata stadium.

2014 saw a release of the fourth LP called Vándalo (Vandal), recorded in one month at Sonic Ranch in Texas. A year after, Larry Fus left the band and was reokaced by Lera, drummer of another band called Les Mentettes.

In 2016, Todos nuestros átomos, the fifth LP was released. The album was produced by Jimmy Rip. The album brought them a Latin Grammy award nomination in 2017 in the Best Rock Album category. A year later, in 2017, the band underwent a scandal; their guitarist Gustavo Fiocchi was accussed of sexual assault on two young fans. Fiocchi admitted to the assault so Bárbara Recanati decided to fire him from the band. Shortly after, the band disbanned as a whole.

Utopians supported Muse during the warm up gigs for The Drones World Tour 2015/16, specifically during the South American gigs between 17th October and 24th October 2015.