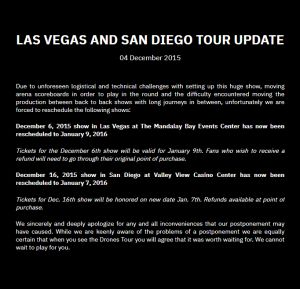 This gig was rescheduled only three days before with the following quote from the band on the website:

"Due to unforeseen logistical and technical challenges with setting up this huge show, moving arena scoreboards in order to play in the round and the difficulty encountered moving the production between back to back shows with long journeys in between, unfortunately we are forced to reschedule the following shows: December 6, 2015 show in Las Vegas at The Mandalay Bay Events Center has now been rescheduled to January 9, 2016."