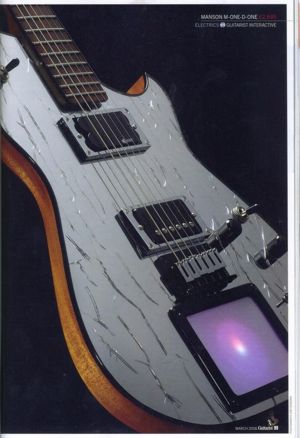 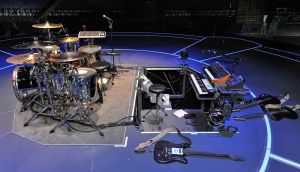 The Korg Kaoss Pad is a touch-operated dynamic real-time effects controller and sampling unit. The base of the Kaoss Pad lays around an XY pad - as you move your finger around the pad you are controlling many sophisticated aspects of a built-in effects processor. Move your finger left to right and you control certain aspects of the sound. Move it up and down and you control other parameters. The Kaoss Pad produces complex sounds that are hard to achieve with any other controller.

The Korg Kaoss Pad is packed with sampling effects like like filters, delays, reverb, and flanging, along with DJ effects like isolator, slicer, and auto-panning. Programs are selectable via a rotating knob. The programs are assignable to eight of the memory buttons for instant recall. The Kaoss Pad also comes with several synth sounds including analog synth programs and ethereal ambiance-type sounds, aswell as vocoder programs for MC or vocal processing. The Kaoss Pad also includes it's own "light show", creating a sense of groove.

Since the start of the Black Holes and Revelations tour, in summer 2006, Manson has incorporated an X-Y MIDI Pad to control a Kaoss Pad to every new Bellamy's guitar, except to the Ali Top Manson and the Manson Doubleneck and both Manson Keytars'. The first one to include this pad was the Kaoss Manson, then the M1D1 Manson, the Glitterati Manson, the Seattle Manson and finally the Chrome Kaoss Manson.

Bellamy's most prominent use of the Kaoss Pad is in the song Supermassive Black Hole. Ever since the Eden Project gig (22nd August 2006), Bellamy has used his Kaoss Pad to imitate a DJ scratching sound during the solo part of the song. Before, he improvised during the solo, mostly using the Fernandes Sustainer.

At the San Francisco Bill Graham Civic Auditorium gig (9th April 2007) the Kaoss Pad was for the first time used for a jam. It was called "Kaoss Jam" on the set list and was played on a few gigs after, but never again since then, until it returned on some gigs on the The Resistance Tour.

Bellamy's also using the Kaoss Pad while transitioning between piano and guitar during New Born, allthough this was ditched during the metal medley of the Simulation Theory Tour as New Born was played in it's shortened version. The Kaoss Pad is also prominently used during the Break It To Me solo's studio version, though the live version includes a newer X-Y pad guitar, which is controlling the Whammy rather than the Kaoss Pad.

During the BH&R tour, one KP2 was included in Bellamy's on-stage pedalboard setup. Since The Resistance tour, the KP2 has moved in his off-stage rack.

Despite being discontinued, Bellamy still chooses to use the KP2 instead of the newer KP3 due to it's unique synth sounds which have been modified or updated for the KP3.

Like Bellamy, Morgan Nicholls has started using the Kaoss Pad, since the start of the Black Holes and Revelations tour, allthough he uses the KP3 model. The KP3 is used by him due to slightly updated built-in ambient synth sounds. Morgan's mostly using the white noise effect on the pad, allthough several other effects come into play during the gig. Nicholls is also using the KP3 as a sampler7effects processor on a few songs, feeding the playback recordings into the KP3 and manipulating the pad itself.

The KP3 is prominently used on songs such as Nishe, the outros and jams of Stockholm Syndrome and the outro of Knights of Cydonia, amongst others. It's used as a sampler on Montpellier Jam and Isolated System.