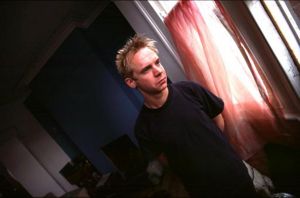 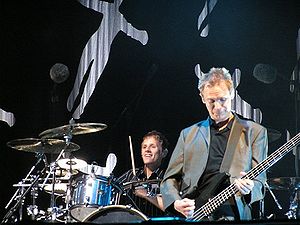 Morgan Nicholls plays the bass for Wolstenholme at Virgin Festival 2004

The fourth member of Muse?

The "fourth member" of Muse some might say. However, like bands such as R.E.M., Muse still remain officially a three piece band. He is only needed for live performance purposes and will not feature in any interviews or promo photos.

History of the man called Morgan

Nicholls originally played bass in the band The Senseless Things and they gained a couple of top 20 hits. He then went on to pursue a solo career under the name 'Morgan' and released the album "Organised". Since then Nicholls has been playing bass for The Streets (no longer, though he is said to enjoy a beer with Mike Skinner from time to time according to this NME interview) and played with Gorillaz (probably becoming the inspiration for Gorillaz character Murdoc Niccals) until he filled in for Wolstenholme when he broke his wrist after a friendly football match with the Cooper Temple Clause (Didz gave him a proper tackle). According to NME, it seems that Wolstenholme was a bit tight with his bass guitars, as a result of which Nicholls had to use his own. It was to a point where when Nicholls left his bass in Leeds and had nothing to play in Reading, he had to borrow a bass off the bassist from the Amplifier. When Nicholls was filling in for Wolstenholme, Muse were already contemplating having him stay on as a permanent keyboard player.[1]

Nicholls is expected to continue appearing at live appearances to play keyboard, bass (Hoodoo), guitar and unplugged synthesisers when Bellamy has a guitar part to play, to avoid backing tracks.

He has missed concerts in the USA during 2006, due to him not having a US work visa.

In 2009 Morgan's wife gave birth to their baby which caused Morgan to take time off playing with Muse in order to spend time with his family. He was replaced by Alessandro Cortini, at the time a former live-Nine Inch Nails keyboardist, during the Admiralspalast gig and the Walter Kerr Theatre gig (which also was a part of the MTV VMA's) in 2009. He was the tour director and bassist for Lily Allen on the first half of her 2009 world tour.[2] Morgan later joined Muse for their tour supporting U2. He still remains a live performance member of Muse.

Keyboard is the Morgan's main instrument for live performance along with synthesizer.