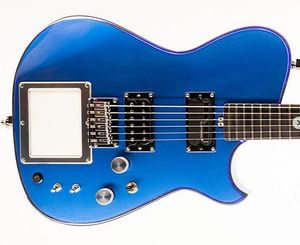 This guitar is similar to the Manson M1D1 Stealth except that it features a built-in Whammy pedal, controlled by the X-Y Screen. The whammy can be played with no external midi needed. Another difference compared to the M1D1 stealth is that the guitar features a Humbucker Sustainiac Pickup at the neck rather than a single coil and is the first Midi guitar built for Matt that features the Sustainiac Humbucker. Visually, it shares a similar appearance to the Manson TronCaster, with LED lights surrounding the edge of the guitar. A demo video, posted on Manson Guitar Works' Instagram, can be seen here.

The guitar, hardware wise, features standard tuning pegs, custom Manson aluminium tone and volume knobs and an alloy X-Y pad frame. The prototype also featured an on/off switch for the Whammy, located underneath the Sustainiac pickup. The switch was removed for the main guitar.

A photo (see gallery) of the production of this guitar together with the Manson MB-1 Blue at Manson Guitar Works leads to the asumption, that Matt got two identical guitars delivered.

This guitar first appeared at the first night of the Simulation Theory World Tour 2019 at the Toyota Center Houston gig. It was used exclusively for Break It To Me as the built-in Whammy allowed Bellamy to play the pitch-shifted solo without having to rely on a foot pedal, controlling the Whammy via the X-Y pad.

Break It To Me