The piano was the first instrument Bellamy really played: "I didn’t have any lessons, and though I tinkered with it since I was five, I didn’t really get interested until I was ten or 11. I used to work on my left hand to “What’d I Say” (Ray Charles) in sort of this boogie-woogie style. I spent ages working that out, practicing the left hand doing one thing and trying to do chords with the right hand."

Since the recording of Sunburn, the majority of Muse's songs have been drafted on piano by Bellamy: "I find it easy to find interesting chords on the piano. Especially because on a lot of stuff we do, the guitar and bass are harmonizing." "Even a song like Stockholm Syndrome was written on piano."

However, on an early TV performance of Sunburn, the band brought in someone else to play the piano part and Bellamy played the guitar (although he later complained that the player was rubbish and got the notes wrong), as Bellamy didn't learn to sing whilst playing the keyboard until the end of the Showbiz era.

This was also when the band began putting an emphasis on more complex, classically-influenced piano-based tracks such as Space Dementia. 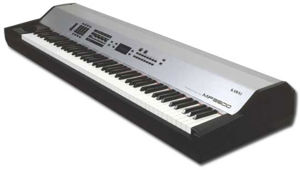 During the Origin of Symmetry tour, Bellamy used Korg SG Stage Piano or a Roland Juno 60 or a Yamaha P80 . This allowed the acoustic piano sounds and electronic/synth sounds (e.g in Space Dementia's chorus) to be routed to their own individual amplifiers.

On the Absolution tour, he used a Kawai MP9500 stage piano. It was mounted on a metal mesh podium nicknamed "The Dalek" which featured LED displays which could be synchronized to the MIDI output from the keyboard and the stage's visuals. For synth sounds two Roland JP-8000s were controlled using MIDI from the Kawai Keyboard and run through Fender Deville Amps to add color & dirt to the sound.

Since the release of Black Holes and Revelations, Morgan Nicholls has become a staple fixture of live performances, with his own keyboard rig, used to replicate the synthesisers used on albums without the need for excessive backing tracks (see below). In addition, Bellamy has updated his own live setup. He now uses a Kawai MP-8 digital stage piano mounted, during the first tour in support of Black Holes and Revelations, in a white, custom made upright piano case built by Vale Pianos. Bellamy sits at this to play piano-based songs such as New Born (intro), Citizen Erased (coda), Butterflies & Hurricanes (solo), as well as Sunburn, Hoodoo, Soldier's Poem and Feeling Good. Since the May 2007 gig at Rockhal, Luxembourg, the digital piano's case has once again been replaced, this time by a black grand piano shell with a transparent acrylic lid. Inside the wing of the piano are MIDI-controlled lights that reflect onto the lid, producing an effect last seen on "The Dalek". It is important to note that this is not a real grand piano, but the same stage piano as used before, merely in a new case.

Since the start of the Resistance tour, Matt has used both the Upright and Grand Piano. For the live performances of Neutron Star Collision (Love Is Forever), Bellamy uses a Kawai ES-6.

For The 2nd Law and Drones Tours, the black grand piano case and the white upright case were refinished in chrome/silver, with the Chrome Grand first being seen at the London Olympic Closing Ceremony.

Since 2017 started, Matt has seemingly ceased using the Grand Piano live and instead uses just the Upright one.

For The Simulation Theory Tour in 2019, The Upright piano shell was replaced a new more simplistic black case, with a lower back to accommodate a synth on top for Algorithm, and features colour-changing LED's around the sides - matching the albums 80s and neon art style.

In an interview with Keyboard Magazine Bellamy said that he's always had a liking for arpeggios since his first keyboard - a Roland Juno 60, which had a built in arpeggiator. This was first featured in Bliss and Screenager and has been even more prominent on Black Holes and Revelations (album). The album features a Buchla 200e modular synthesizer (which was purchased during the Miraval sessions in 2005).

Since the 2006 tour, in live performances these arpeggios are played using MIDI backing tracks via a MiniMoog Voyager RME. When Nicholls or Howard have nothing else to play they adjust the filter control of the synths to add color to the arpeggios.

In an XFM Exposure Interview, it became clear that it is Howard who has spearheaded the increased use of modular synthesisers on Black Holes and Revelations - he liked the idea of recording a whole disc of synthesised music. It is Howard who controls the synth's filter during live performances of Take a Bow, when Morgan Nicholls is not on stage. He has used a variety of synths including a Buchla, another MiniMoog Voyager (e.g Shepherd's Bush) and a bespoke modular sythesizer by Macbeth Studio Systems (e.g Reading Festival 2006), photographs can be seen on their web-site.

In 2018, Bellamy included an Arturia MatrixBrute to acompany his piano. He's using it to play the lead synth in Algorithm.

In an interview with Matt's in 2019, it was revealed that for the Simulation Theory World Tour, Matt's tech, alongside MIND Music Labs, Fishman and Arturia, built a custom-made Prophet V soft-synth system into his guitar. Bellamy has so far used the synth during The Dark Side's solo. 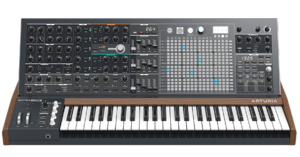 During the Absolution tour Chris also occasionally used a Roland JP-8000 to play the intro to Time Is Running Out (early) and the string part of Blackout for which he also played Bellamy's Kawai.

Wolstenholme also played a pedal-board in some songs, for example the pad sound in Sing for Absolution.

For current Simulation Theory tours, Chris has also got a new custom Status Keyboard Bass, which includes, as the name implies, a keyboard built into the bass. The keyboard is connected via a wireless MIDI unit to Chris' tech's Apple MacBook, running Logic Pro X's MainStage software.

The range of synthesiser parts used in Absolution meant that during the tour in support of it, the band began to use backing tracks in order to perform the songs in their entire nature. However, in the time leading up to the release of Black Holes and Revelations, Bellamy discussed how they had, as a band, decided to use a fourth live member from now on, to reduce the need for such backing tracks. This man is Morgan Nicholls, famed multi-instrumentalist. As befits a man of his enigma, Nicholls's gear remains something of mystery. His two keyboards can be identified as a Clavia Nord Modular G2 (responsible for the band's vocoder effects), and a Novation ReMOTE SL 61 MIDI controller. His Rack definitely contains a MiniMoog Voyager RME, an Electrix Filter Factory and an Electrix Mo-Fx MK2. He is also using a Damge Control TimeLine and a Korg KP3. 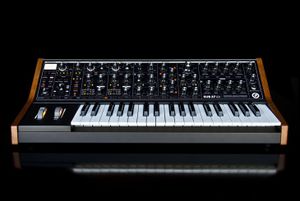 He replaced his Novation kyeboard from Black Holes and Revalations era with the Kawai MP6 as his main keyboard during The Resistance era and has used it in the first few gigs of The 2nd Law era.

Furthermore he is using Logic and software instruments that he's playing live.

Since the first gig of The 2nd Law tour, he switched to the Novation Mininova for Vocooder effects and additional choirs on Survival and has also started using the Doepfer D3M keyboard. He is also using 2 iPads, one with the Liine Lemur software for easy acces to controlling the Logic software on stage and other with MainStage software for MIDI keyboard sounds.

During the Drones tour Morgan replaced the Novation Mininova with a Moog Sub37.

Alike Matt and Chris, Morgan uses a Kemper Profiling Amplifier (white) for touring. It is placed in rack, beside Chris' racks.