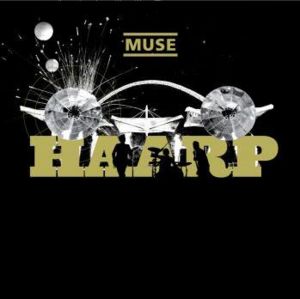 There are two versions.[7] The regular edition comes in a jewel case, and the special edition comes in a card box with three postcards.[6] The latter was reported to include more backstage footage than the former.[6] In the US, the special edition is limited to 1000 copies.[8] The commercial download of the CD audio through 7digital is DRM-free.[9]

City of Delusion was available only through the iTunes Store pre-order.[10] Knights of Cydonia, Feeling Good, and Time is Running Out can be heard on Muse's MySpace.

The concert footage on the DVD was shown in high definition video at selected Vue cinemas during March 2008.[11]

At 55:44, during New Born a mobile phone can be heard ringing.

Muse played two nights at the Wembley Stadium on the 16th and 17th of June 2007. In July, it was rumoured that a DVD of the Black Holes and Revelations tour in general was in the making.[12] The first hint of a DVD of the concerts was when Play.com started listing the DVD on the 13th of September as "Live at Wembley 2007",[13] to be released between the 19th and 26th of November.[14][12] One of the muselive.com admins seemed to reveal that the band did not want fans to know about the DVD by that time.[15] An 18th September news post on the official French fanclub revealed that the release would contain both a CD and a DVD.[12] This news post compared the DVD with Hullabaloo.[12] HMV Japan's news 3rd October news item stated that it would be a recording of both nights.[16] at Wembley Stadium. The official French fanclub further elaborated on the 26th of October that the DVD would feature a partial 17th setlist and the CD would feauture parts of both nights.[17] In this news post, it was said that DVD would also host some backstage images and a documentary about the concerts[17] and that there would be three versions, one a CD+DVD, one sole DVD and one a box set containing the CD+DVD and postcards.[17] Additionally, this news post stated that the release would be on the 3rd of December.[17]

Around this time, some websites had listed this upcoming release as being a "Greatest Hits" album,[18] but this was rebuked by muselive.com and Muse's management on the 7th of October.[19]

In December, Christopher Wolstenholme said that the DVD had been delayed as the band wanted more time to work on it, whereas Warner wanted out in early December,[20] presumably to benefit from Christmas sales. He also stated that the band would prefer to release one version of the DVD worldwide (without any Japanese bonus tracks), but in 3 editions.[20] In light of this, the previous comment from Muselive's admin may have been to do with this disagreement. 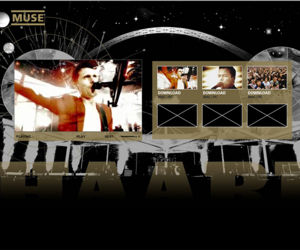 he-3.mu after the release of Feeling Good

Five official pro-shot videos have been released of the second night - Unintended, a partial Knights of Cydonia and the same Knights of Cydonia preview with Supermassive Black Hole on the end, respectively. The first was released through the Muse mailing list, on the 24th of December.[23] The second was released through the Helium 3 website on the 11th of January 2008.[24][25]

Thumbnail of the first preview video, Knights of Cydonia.

At the time of the second video's initial release, there were five additional placeholder spaces on the Helium 3 website,[24] which was the number of weeks between the unveiling of the Knights of Cydonia clip and the release date of the DVD listed on online stores at that time, 18th of February.[21] This lead to speculation that there would be a clip released for each of the weeks leading to the DVD's release.[26] 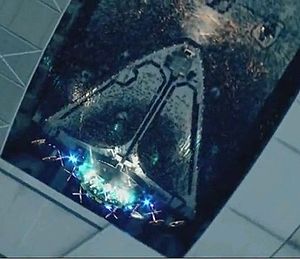 The crowd during the Wembley gigs looked like a spaceship, complete with cockpit and exhaust!

Although this speculation turned out to be inaccurate, as of the 31st of January a thumbnail for a second video had been uploaded to the Helium 3 website.[27] Later on the same day, it was noticed by fans[28] that an extended video had been linked to at the end of the original one which included Supermassive Black Hole at the end.[29] Whether any of these edits will be on the DVD is unknown.

The official Muse website confirmed on the 1st of February that there would be a CD+DVD of the concerts released, scheduled for the 17th of March.[3] Unlike previously hinted by the official French fanclub and Warner France,[17] the CD will feature audio just from the first night rather than a mix of the two nights.[3] As previously reported,[17] on the DVD will be recordings of the second night.[3] Accompanying this official news item, the third video was put up on the Helium 3 website visibly, while the placeholders were removed.[30]

On the 4th of February, Muse sent out a press release with the track listing of both the CD and the DVD. The CD set list and the missing DVD track, both previously unknown, were included in the press release.[31] The previously unknown track was Apocalypse Please.[17][31] An official news item the next day confirmed the tracklisting, with the addition of introduction tracks at the start of both discs and the improvisation between Starlight and Time Is Running Out on the DVD.[7] Also from this news item; similarly to Christopher Wolstenholme's previous wishes,[20] the release will come in two editions. One will have additional artwork and one will be enclosed in two boxes.[7] By the 15th of February Play.com had started listing the artwork version, which they elaborated as having three postcards included.[6] Play.com further claimed that while both versions will have some backstage footage, the artwork version will have more of it.[7]

The CD was leaked on the 1st of March through private Bittorent tracker Waffles.[35]. Yet another video, this time of Blackout, was uploaded to the Helium 3 website on 7th March.

The last video, of the outro of Stockholm Syndrome, was uploaded to the site on the 17th March, the day of the official release of the DVD.