Acoustic fingerpicking. Unintended was written sometime around 1998, although possibly being written in 1997. It was written on a keyboard, and it was not played live much in 1998 because of the fact that the band needed a keyboard player in order to do the song. By December 1998, however, it was re-written on guitar, appearing in the only complete 1998 setlist. By 1999 the song was still performed rarely, only making about thirty estimated appearances throughout the course of the year.

Played heavily during the 2000 tour as a lighter anthem and occasionally during 2001. It returned to the set list with recent 2007 gigs (played in the key of D insted of E). When it was played from 1999 through 2001, both Bellamy and Wolstenholme would play guitar. Matt's was electric and Chris' would either be acoustic or electric. Chris would also play the bass with a foot pedal controller. From 2007 onwards, Matthew has been playing guitar, Chris has been playing bass and Nicholls plays keyboards occasionally. When the song returned for The 2nd Law stadium tour, Matt only sang and Chris played electric guitar.

Bellamy's explanation: "There are a few unintended love songs as well. The song I wrote about the girl was written in the studio after a phone conversation with her. We called it 'Unintended' because it came out of nowhere, and I didn't mean it to happen, all of these feelings for this girl".

A remix exists, entitled "MG remix", by "Jirob". "Jirob"'s first name appears to be Matt, judging his url, and Jirob stands for "J in Red on Blue". The track begins with an oldie worldy effect, followed by a sped up dance section. 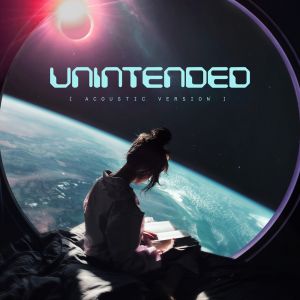 Official artwork of the acoustic version

In 2020, Bellamy announced he would be releasing an official stripped back acoustic version of the song, recorded on piano and vocals. The song was released on June 26th under his own name. Part of this piano version was teased before by Bellamy in an Instagram post from December 2019, when he wore a reindeer onesie while driving a hoverboard, which makes it likely it was recorded in December of 2019, if not earlier.[3] It was produced by Rich Costey and engineered, mixed and mastered by Aleks Von Korff.

Together with the acoustic one, two more versions were released; The "Piano Lullaby Version", which is just an instrumental of the acoustic version and the Obeebo A.I. version, an artificial intelligence remaking of the piano version.[4] That version analyzed the harmonic structure of the acoustic and created a series of new compositions which imitates the feel of the original but deviate from it. Matt chose variation 3, as variation 1 and 2 were too simplistic with no modulation. The A.I. was taught to understand the music theory behind circle of fifths relationships. He stumbled across the circle of fifths pattern by accident as a teenager by simply putting together the most common open chords on the guitar (E, A, D, G, C using B as a turnaround) which led to the original song. He used the same pattern in the chorus of the song New Born.[5]

Unintended was written and debuted sometime in 1998. Matt was very apprehensive towards playing the song originally, as he originally envisioned it being performed using a keyboard, though he could not afford someone to play one. Thus, the band held off on playing Unintended for quite some time. Unintended remained a rare song all throughout 1999 before finally being played on regular rotation starting in January 2000. Unintended was performed at the majority of gigs in 2000.

You could be my unintended

Some early live versions had a different chorus:[6]

I'll be there as soon as I can