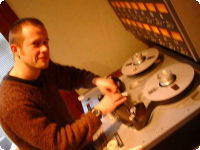 Paul Reeve is a music producer. Reeve assisted Muse with some of their first records.

He provided the backing vocals of the Muscle Museum EP recording of Unintended, and Instant Messenger.

Later, on Absotuion, he also provided additional backing vocals on Butterflies & Hurricanes and Blackout, and the vocal samples of Intro.

He started work with Muse on Absolution, before being replaced by Rich Costey. In February 2012, he confirms on Twitter that he would work with the band with their sixth album The 2nd Law.

Reeve has also worked with other artist such as Steve Harley, Supergrass and Wood.

In March 2019, Paul agreed to answer a few questions regarding his time with Muse for Maria Nero - you can read the transcript here