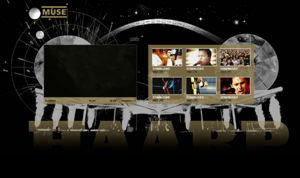 Helium 3 site screenshot, by the time the last video was added 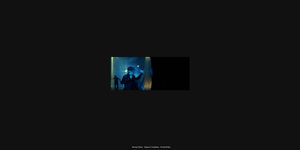 Helium 3 is Muse's own record label, and a subdivision of the Warner Music Group. The label was formed prior to the release of Black Holes and Revelations since A&E Records, itself an offshoot of Mushroom records, was reorganised.

The label gives the preffix "HEL-" to all related catalogue numbers of post-2005 Muse releases.

The official website was used to promote the H.A.A.R.P. live CD/DVD, hosting 6 preview clips of some videos included in the DVD. On 11th January 2008 was first hosted a short clip of Knights of Cydonia, and lately a new clip of Supermassive Black Hole was added. On the 14th of February another preview appeared, this time from Feeling Good, mainly focusing on the crowd, singing along to the song. Later that month, on the 29th, a video of the riff (after the piano intro) of New Born was added. Yet another video, this time of Blackout, was uploaded to the website on 7th March. The last video, the outro for Stockholm Syndrome, was made available the day of the release of the DVD, 17th March.

The website was previously used to be the official website for the Starlight single at the time that it was released, from 2006 to December 2007.

Later, the website consisted of a black page with an encrypted message. Solving the message lead to a download link for the 2008 Muse Christmas present: a screensaver consisting of videos taken during the recording of The Resistance. The message reads: Happy christmas from MUSE. To get a free screenaver go to: http://www.muse.mu/christmasscreensaver

In 2012, the website was used to promote the single Madness. A very short GIF would loop when viewing the site. Refreshing the page would display a different GIF. The GIF on the site is still displayed to this day.

The name "Helium 3" is derived from the isotope Helium-3. This isotope of Helium is of particular interest in physics for several reasons, including its use as a potential fuel for fusion power, and the behaviour the substance displays when cooled to very low temperatures.

Other works released under Helium 3