MuseWiki, wiki for the band Muse
(Redirected from Chris Wolstenholme)
Jump to navigation Jump to search 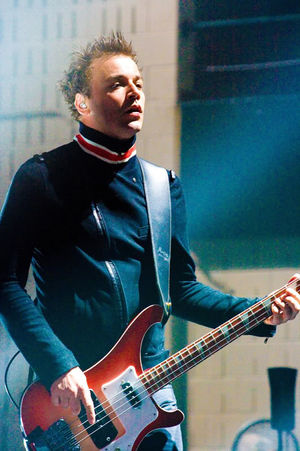 Chris was born on the 2nd of December 1978 in Rotherham, Yorkshire (home of the Chuckle Brothers) but also moved to Devon during his teenage years (at age 11). His mum would buy records regularly, influencing his interest in music. He started by learning to play the guitar, followed by the drums. Chris played drums with a local band named Fixed Penalty, before leaving to learn and play the bass when he met Dom and Matt, creating the Rocket Baby Dolls.

Chris plays bass and provides backing vocals, as well as the occasional synthesizer lines (such as on Hysteria, Madness and The Void), drums and percussion (Pray, Supremacy, Apocalypse Please). He also sang and wrote two tracks on the sixth studio album (The 2nd Law), When the band started playing Plug In Baby live, he asked for a new set of strings to be put on his bass each time they played it, to get just the right sound he wanted. Chris is a big fan of the Beach Boys. His displayed vocal range goes from G2 to D5, with modal highs up to B♭4 which he has hit several times live during songs as Follow Me and Dead Star. His lowest note was hit during Shepherds Bush Empire in 2013 at the end of Save Me, and his highest can be heard during live performances of Uprising, at the "Come on".

Wolstenholme was also part of various side-projects involving smaller local bands Chris is friends with. In 2008, he joined Hey Molly on drums, the performance can be seen here. In 2014, he joined an English 2 piece rock band Moriaty as an unofficial third member, and he played bass guitar on their new EP 'Bones'. He was also featured in the music video, and it can be seen here.

At his home, Chris transformed a wine cellar into a home studio in which he records and writes his own stuff, sometimes records stuff for Muse and he occasionally records and producers local bands.[1]

On the 2nd September, 2010, Chris invited fans out for a game of football in Manchester via Muse's Twitter. This resulted in a number of fans thinking that Muse's account has been hacked up until the moment when Chris tweeted a photo of himself and a football. Soon after, he got his own Twitter account (@CTWolstenholme).