Muse have been nominated.

Muse have been nominated.

The nominees were announced by Zane Lowe on BBC Radio 1 on the 30th of January.[1] The ceremony will be held inside the Brixton Academy on the 29th of February.[1]

Muse were nominated, as were Arctic Monkeys, Bombay Bicycle Club, The Horrors, and Kasabian who won the Award.[1][2]

Muse were nominated, along with Kasabian, Pulp, Two Door Cinema Club and the Arctic Monkeys who won the Award.[1][2]

Both Matthew Bellamy and Dominic Howard were nominated, along with Andy Biersack (of Black Veil Brides), Gerard Way (of My Chemical Romance), and Jared Leto (of 30 Seconds to Mars) who won the Award.[1][2]

Muse fans won the Award![2] Also nominated were fans of 30 Seconds to Mars, Arctic Monkeys, Hurts, and My Chemical Romance.[1]

Muse was nominated, alongside Beady Eye, Coldplay, One Direction (who won the Award), and Viva Brother.[1][2]

Muse won this for the second year in a row.[5] Also nominated were Arctic Monkeys, Biffy Clyro, Foals and Kasabian.[4]

The nominations for the 2010 NME Awards were announced on 25th Jan. The Awards were held on 24th February at the O2 Academy Brixton.[7][8]

The 2009 Teignmouth gig was nominated. Blur at Hyde Park won.

Black Holes and Revelations was nominated. Also nominated: Arctic Monkeys - 'Whatever You Say I Am, That's What I'm Not', Kasabian - 'Empire', The Killers - 'Sam's Town', and My Chemical Romance - 'The Black Parade'.[12]

Supermassive Black Hole was nominated. Also nominated: Dirty Pretty Things - 'Bang Bang You're Dead', The Killers - 'When You Were Young', Klaxons - 'Atlantis to Interzone', and The View - 'Wasted Little DJs'.[16]

Origin of Symmetry was nominated. Also nominated: The Charlatans 'Wonderland', Radiohead 'Amnesiac', Slipknot 'Iowa', and The Strokes 'Is This It'.[18] 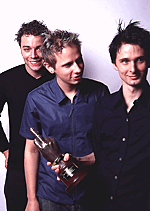 Muse at the NME awards