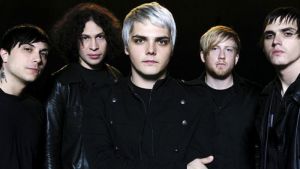 My Chemical Romance were an alternative rock band from New Jersey, US, who have supported Muse on numerous occasions in the US and once in the UK. The band consisted of vocalist Gerard Way, guitarists Ray Toro and Frank Iero, bassist Mikey Way and drummer Bob Bryar. The band was formed soon after the September 11 attacks in 2001. Seeing the towers fall, Gerard Way's life was influenced to the extent that he started a band, writing the song Skylines and Turnstiles which talked about the attacks. The bands first album was released in 2002 and is called I Brought You My Bullets, You Brought Me Your Love. Their second album, Three Cheers for Sweet Revenge was released in 2004. In 2006, the band released probably their most iconic album The Black Parade.

Gerard Way, announced at their 11th December 2006 concert '89x Stole Christmas' in Detroit, that Muse and Rise Against will be opening for them during their 2007 tour.[1] This was later confirmed, and Muse opened for them on the second leg of their 2007 U.S. Tour, called "My Chemical Romance with The Black Parade". In an interview with Steven Smith on Steven's Untitled Rock Show, Way said "We hold Muse in such a high standard. They're an inspiration to us, and what they do I feel is groundbreaking every record. The fact that they would play in the US with us and support just meant the world to us".[2]

After cancelling My Chemical Romance's mid 2007 gigs at which Muse were scheduled to support, a Virginia chef was reported to have received death threats.[3] The Sun, who reported this, claimed that "My Chemical Romance and Muse have been caught up in a death threat scare" - it is unclear whether the bands were actually threatened themselves, or whether this is merely a misleading statement on The Sun's part.[3]

When Matthew Bellamy was asked about what influence he thought that their music would have on My Chemical Romance fans (during Muse's MCR support), he said "um, you know, take them to a higher level [laughs]".[4]

Howard on My Chemical Romance in NME - "They're taking a style of music which you probably think they are and taking into a reallly expressive, epic, place. It really sounds very Queen and I love that. We have a bit of Queen in what we do too, so hearing that has made me appreciate their music a whole lot more. Their live show is amazing - they put a lot of energy and soul into their performance."

My Chemical Romance supported Muse on their second night at Wembley Stadium along with Biffy Clyro and Shy Child. After their performance, Way thanked Muse before going offstage.

Their last ever album was released in 2010 and is called Danger Days: The True Lives of the Fabulous Killjoys. In 2012, My Chemical Romance revealed unreleased songs recorded in 2009 in a project called Conventional Weapons. The band broke up in March of 2013. In 2014, they released their greatest hits collection May Death Never Stop You. A series of cryptic messages was posted on their social media in 2016 which led fans to believe they were getting the band back together, however this turned out to be a promotion for a reissue of The Black Parade called The Black Parade/Living with Ghosts with unreleased demos released in 2016.

Since the break up, the band members took on various solo projects, including Frank Iero and the Future Violents and Gerard Way's solo songs featuring Ray Toro and Mikey Way, the latter of which also spread rumors about a possible My Chemical Romance reunion, which was later, in Autumn of 2019 confirmed by them on their Instagram as a reunion show announcement set to happen on December 20th, 2019.