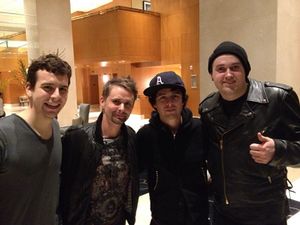 Matt and Billie at the Toronto Gig in 2013

If you don't know who they are, you've been stuck under a rock for the past ten years or so. This well known Punk Pop group is lead by Billie Joe Armstrong on guitar and vocals, with Mike Drint on bass and Tré Cool on drums.

Dom is known to have liked Green Day when they played the 2005 Brit Awards.

Billie Joe Armstrong went to see Muse live at the Toronto Air Canada Centre in the second night in 2013.