On the Couch interview prior to winning the "best new band" award. 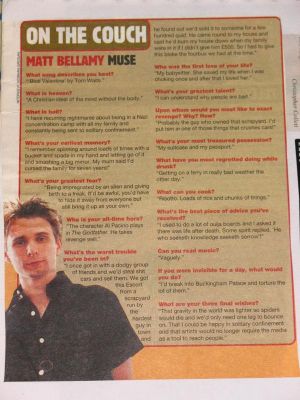 What song describes you best?

A Christian ideal of the mind without the body.

I have recurring nightmares about being in a nazi concentration camp with all my family and constantly being sent to solitary confinement.

I had a bucket and spade when I was young and I remember spinning around loads of times with it and getting dizzy. I let go of it and it smashed a big mirror and my mum said I'd cursed the family for seven years!

What is your greatest fear?

Being impregnated by an alien and giving birth. It'd be awful to give birth to a freak so you'd have to hide it away from everyone but still bring it up as your own.

Who is your all-time hero?

The character Al Pacino plays in 'The Godfather'. He takes revenge well.

What's the worst trouble you've been in?

I once got in with a dodgy group of friends and we'd steal shit cars and sell them. We got this Escort from a scrapyard run by the hardest guy in town and he found out we'd sold it to someone for a few hundred quid. He came round to my house and said he'd burn my house down when my family were in it if I didn't give him £500. So I had to give this bloke the tour bus we had at the time.

Who was the first love of your life?

My babysitter. She saved my life when I was choking once and after that I loved her.

I can understand why people are bad.

Upon whom would you most like to exact revenge? Why? How?

Probably the guy who owned that scrapyard. I'd put him in one of those things that crushes cars!

What's your most treasured possession?

My suitcase and my passport.

What have you most regretted doing while drunk?

Getting on a ferry in really bad weather the other day.

What can you cook?

Risotto. Loads of rice and chunks of things.

I used to do a lot of ouija boards and I asked if there was life after death. Some spirit replied 'He who seeketh knowledge seeketh sorrow'!

Can you read music?

If you were invisible for a day, what would you do?

I'd break into Buckingham Palace and torture the lot of them.

What are your three final wishes?

That gravity in the world was lighter so spiders would die and we'd only need one leg to bounce on. That I could be happy in solitary confinement and that artists would no longer require the media as a tool to reach people.