.mu is the top level domain of Mauritius, but is sometimes used as a TLD for music related sites due to its "mu" being a constituent of "music", in a way similar to that in which .dj and .tv are marketed.

The Absolution, Black Holes and Revelations and The Resistance era versions were designed by Splendid. Previous designers include Nonplane. 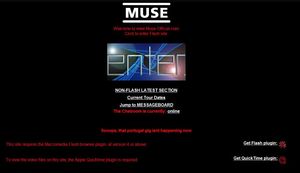 muse-official.com is the website's old domain name. It was active between 2001 to April 2003. Activity at other times is unknown. Sometimes in the Welcome Page Muse used to put running Jokes, like "Oops! That Portugal gig isn't happening now" back in May, 2001. 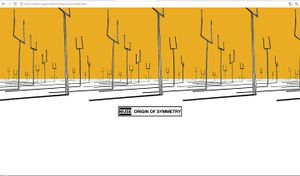 Originofsymmetry.com was a website created to promote and give information about the album released in 2001. It's now been long ago dead, in this website you could download the (A)Muse App, with through you could chat and see another super interesting things like Visuals for the tours and news about the band.

musclemuseum.com is an older incarnation of the website, from the Showbiz era.