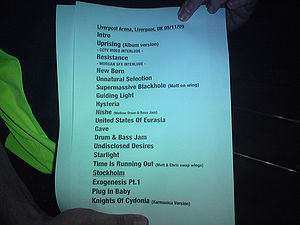 This concert was part of the European leg of "The Resistance" tour, announced on the 1st of June with general ticket sale starting on the 5th thereof,[1] at 09:00.[2] Fan pre-sale information and links were given on the 3rd[5] and pre-sale sold out on the given day - the 4th.[source?]

The balloons were released during Stockholm Syndrome. After Knights of Cydonia, Matt pointed at the centre of the crowd for the large mosh pit that was made during said song. He then preceeded to move round to the back of Dom's drum kit and jump up and down repeatedly waving at the people up in the upper tier.