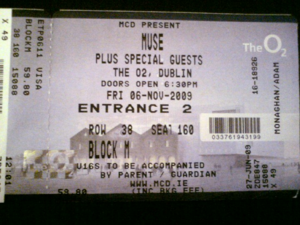 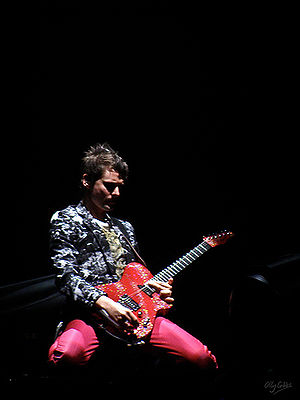 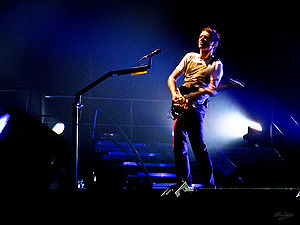 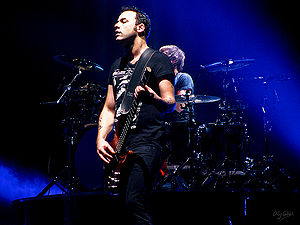 Chris & Dom at The O2 Dublin

Part of The Resistance Arena Tour

This concert was announced on the 1st of June, 2009.[1] Fan pre-sale information and links were announced on the 3rd of June.[3] Pre-sale took place on the 4th[3] and general sale started the following day.[1]

Balloons were released during Plug in Baby. Howard introduced "Unintended" saying, "Hi Dublin. We'd like you to take out your lighters, for the old schoolers, and your mobile phones, for the new schoolers, so we can light up this lovely venue here..."

Bellamy played the intro to Plug In Baby lying down on his back at the edge of the stage.[4][watch]

Early on in the gig, an Irish flag was thrown onstage. Bellamy picked it up and handed it to Howard, who held it above the drumkit before draping it across it. Later, at some time during Knights of Cydonia, Bellamy wore the flag across his shoulders- the flag draped across the body of the guitar; Bellamy played the strings through the material. At the end of the song, Bellamy held the flag over the vertical gas vents and allowed them to buffet the flag. Bellamy then left the stage with the flag in hand.

At the very end, Dominic spoke into Wolstenholme's microphone to say "Thank you Dublin! You guys are amazing, thanks, see you again."