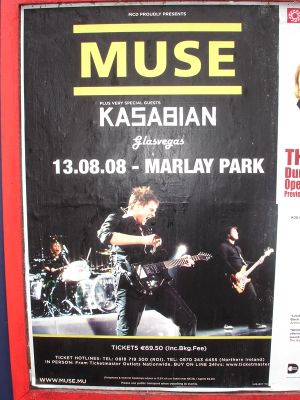 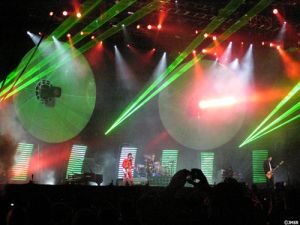 Lasers during Take a Bow 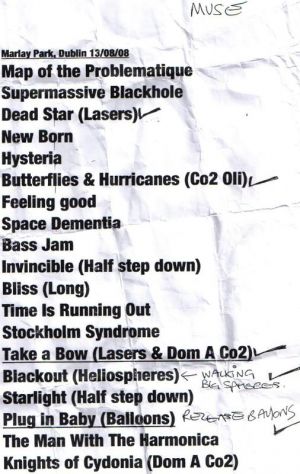 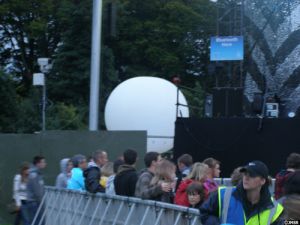 A member of the Muse board reported that Dublin radio channel Phantom FM had claimed Muse were going to perform at Marlay Park sometime in 2008. Muse had purportedly said this during the Meteor Awards night.[1] Later, on the 18th of February Matthew Bellamy mentioned possible concerts in both Dublin and Belfast, during his interview with Virgin Radio host Ben Jones.[9]

A member of the Muselive received informal confirmation from Phantom FM on the 21st of February that Muse would be performing in Ireland sometime during 2008. This was a response to an e-mail inquiry sent a few days earlier. Phantom FM implied in this response that they would announce the concert and broadcast or otherwise publish an interview with the band.[10] Bellamy again mentioned gigs in both Dublin and Belfast, during the NME Awards on the 28th of the same month.[11][12] At the NME awards, Bellamy expressed a desire on the part of the band to have Glasvegas, who had won the Philip Hall Radar Award, as support for the Belfast and Dublin gigs. He said Muse needed a "good" band to play with.[11]

State magazine printed in their 4th April issue that tickets would go on sale 11th April and that the concert would take place on the 13th of August.[4] Official confirmation was given on the 14th of April, tickets in fact went on general sale on the 19th of April at 09:00 through Ticketmaster.[3] The pre-sale spanned from the 09:00 on the 18th of April to 08:00 the following day.[5] The concert was promoted by MCD Productions.[5]

The first support act revealed was Kasabian, with the official gig announcement.[3] The second was Glasvegas, through the Glasvegas MySpace profile on the 1st of May.[6][7]

Blackout was on the set list,[13] but was not played. The 'Heliospheres' presented at the Wembley Stadium and Parc des Princes gigs could be seen in the backstage area by the crowd. They were inflated but were not used, due to the weather conditions.[source?] The lasers used at the 2006 MTV EMA awards were used during Dead Star and Take a Bow. Matthew Bellamy played along with the opening riff of Hysteria, similarly to when the song was first preformed in 2002. The balloons were released during Plug In Baby. Christopher Wolstenholme, playing the harmonica, began a cover of Ennio Morricone's Man with a Harmonica in the form of an intro to Knights of Cydonia.