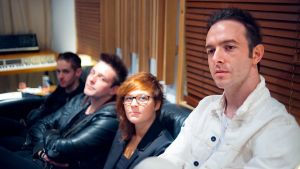 Through their career, the band have released three studio albums, Glasvegas (2008), Euphoric Heartbreak (2011) and Later...When the TV Turns to Static (2013). Despite the small discography, they are still active as a gigging band.

They supported Muse at Dublin's Marlay Park gig, in August 2008.

All three members of Muse have said positive things about Glasvegas. In a interview on Zane Lowe, on February 2008, Howard said "I think they're a really great band, you know, and I think there's gonna be some... great things", to which Bellamy added "Glasvegas, brilliant. Yeah, yeah I'd love to do some gigs with them actually, hopefully, yeah. I really really like them. I mean I haven't seen them live and I'd like to see them". After that, he revealed that he wanted them to support Muse on their upcoming Belfast and Dublin gigs, by saying "we want them to play with us actually uh, we're doing a gig in Belfast and Dublin, this year. We need a good band to play with"[1]. It was later announced, on 1st May, through Glasvegas' MySpace, that they will be supporting Muse at the Dublin gig.

Later, in an interview with XFM, on April 2008, Wolstenholme mentioned Glasvegas as a new band that they're in at the moment, and he said that Muse are "sort of generally into them", that he had "sort of heard a few tracks" and that he thought that Glasvegas "'are gonna be pretty, pretty huge, I think they're wicked"[2]