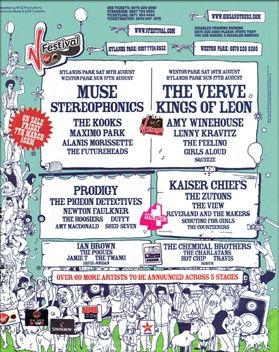 A user of Drowning in Sound claimed on the 21st of January that a "reliable industry source" indicated that Muse would be headlining V Festival 2008.[7] Three days later, Glastonbury organiser Michael Eavis commented that he'd heard that Muse were playing V Festival.[8] In the comment, he appeared unsure - this belief may have derived from rumours started by the aforementioned claim.[7][8] Following Eavis' comment, eFestivals listed Muse as a "strong rumour".[9] However, on the 29th of January they removed Muse.[9] The next day, an eFestivals admin stated they had information that Muse were not going to play V Festival 2008.[10] This information proved to be false, as on the 12th of February, the Muse website announced Muse would be playing V Festival 2008.[2]

The first pre-sale took place on the 3rd of March, for customers of Virgin Media or Virgin Mobile services only. A second pre-sale spanned the hour before general sale, at 09:00 on the 7th of March.[11] Tickets went on sale the same day[2] at 10:00.[12]

Matthew Bellamy initially said in the June 2008 issue of Q magazine that "a couple of new songs should be played",[source?] but later recanted during a July after-show party, wherein he stated that no new music would be played live this year.[13] As previously hinted at,[source?] the band submitted a plan to the festival's health and safety personnel, for a "stunt" involving a model UFO approaching the stage. This plan was rejected.[14]

Bellamy wore red, Wolstenholme wore black and white and Dominic Howard wore a black shirt with blue trousers. Bellamy tossed his Manson Chrome Bomber across the stage at the end of Knights of Cydonia.

A pro-video shot of Dead Star was released as a form of a Christmas gift. Hysteria, Knights Of Cydonia and Supermassive Black Hole were shown on 4Music.