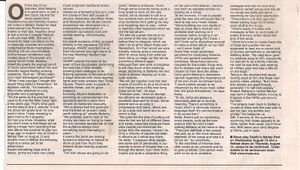 An article in The Irish News' 2008-04-04 supplement, "Scene". The information within was taken mostly from a press conference at the Meteor Awards 2008.

Regarded as one of the best live bands in the world, English rock trio Muse have just confirmed two major gigs in Belfast and Dublin this summer. Scene spoke to frontman Matt Bellamy about extravagant purchases, Irish stalkers and the band's soon to be recorded fifth studio album...

Go back to The Irish News