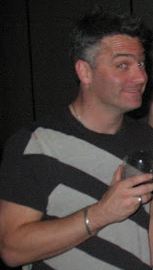 "Dom Anderson at an aftershow party"

When he's not stressing out lugging about a tour and co-ordinating behind-the-scenes event organisation, promotions, business and other stressful things - he takes time out for playing golf, follows the San Diego Chargers and according to his twitter likes fancy food and a good drink. He is currently in a relationship with Kari DeLonge, sister of Tom DeLonge.

Dominic was a lead singer for the band "Understand". These were a post hardcore/rock band and they had some success in the industry

Dom attended the University of Brighton between 1993 and 1994. He left as he landed a record contract[1].
He also attended Greensward School in Hockley Essex[1].

"Considering where they’re at in life they’re extremely down to earth. The bother for me is the situation, trying to drag this huge show around the world. They like to enjoy themselves out on the road so when there’s downtime we organise trips – fishing and skiing, all kinds of stuff. That’s great, but at the end of the day the bottom line is the gig."[2]

from Chris: to Dom: "fucking hell. They'll be doing awards for best tour bus driver next."[3]
from Dom Anderson back to Chris:"sorry they don't have an award for most children!... just get on with voting for me abd RTing (re-tweeting) to all your followers big boy."[4] 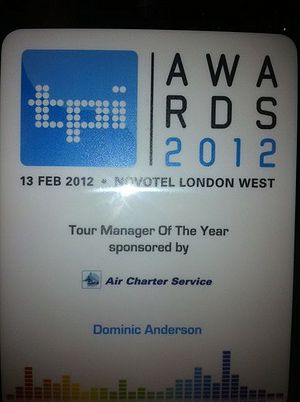 Dominic won the "Tour Manager of the Year" Award at the TPi Awards 2012. Dom posted a picture of the award[5] via Twitter (which he was not present to collect)