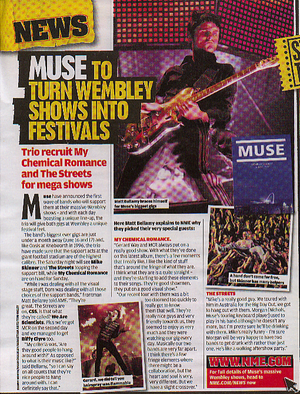 Trio recruit My Chemical Romance and The Streets for mega shows'

Muse have announced the first wave of bands who will support them at their massive Wembley shows - and with each day boosting a unique line-up, the trio will give both gigs at Wembley a unique festival feel.
The band's biggest ever gigs are just under a month away (June 16 and 17) and, like Oasis at Knebworth in 1996, the trio have made sure that the support acts at the giant football stadium are of the highest calibre. The Saturday night will see Mike Skinner and The Streets topping the support bill, while My Chemical Romance are on hand for Sunday.
"While dealing with all the visual stage stuff, Dom was dealing with all those choices of the support bands." frontman Matt Bellamy told NME, "They're great. The Streets are on, CSS, is that what they're called? We Are Scientists. Plus we've got MCR on the second day and we managed to get Biffy Clyre too.
"My criteria was, 'Are they good people to hang around with?' As opposed to what is their music like?" said Bellamy, "so I can say on all counts that they're nice people to hang around with. I can definitely say that."

Here Matt Bellamy explains to NME why they picked their very special guests:

"Gerard Way and MCR always put on a really good show. With what they've done on this latest album, there's a few moments that I really like. I like the kind of stuff that's around the fringe of what they are. I think what they are is a quite straight - and they're starting to add these elements to their songs. They're good showmen, they put on a good visual show."
"Our recent tour with them was a bit too doomed too quickly to really get to know them that well. They're really nice guys and very friendly towards us. they seemed to enjoy us very much and they were watching our gig every day. Musically our two bands are very far apart. I think there's a few fringe elements where there might be a collaboration, but the heart and shoul is very, very different. But we have a slight crossover."

"Mike's a really good guy. We toured with him in Australia for the Big Day Out, we got to hang out with them. Morgan [Nichols, Muse's touring keyboard player] used to play in his band although he doesn't any more, but I'm pretty sure he'll be drinking with them. Mike's really funny - I'm sure Morgan will be very happy to have two bands to get drunk with rather than just one. He's like a walking aftershow party."