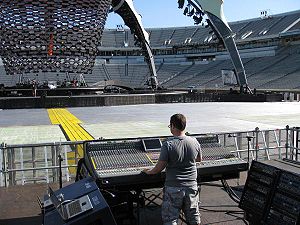 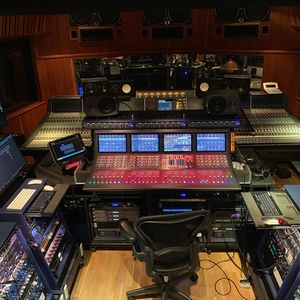 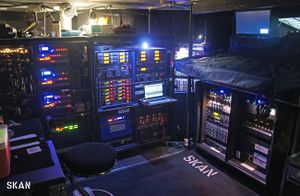 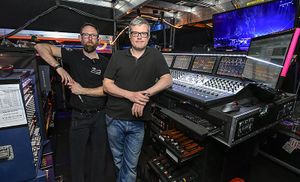 Muse make increasing use of backing tracks when performing live. This is a recorded track that the band play along to in order to add extra layers to their music which cannot be played by only three people.

This includes, for example, the orchestral strings in "Butterflies & Hurricanes", the synthesizer arpeggio in Bliss and the "Now, I want it now" backing vocals in "Hysteria" are played by Morgan Nicholls.

To keep in time with this track, the band have a digital metronome – synchronised to the recording – playing through their In-Ear Monitors, which the audience do not hear. A click track is also used in some songs which do not have backing tracks in order to keep in time with synchronised guitar effects like delays, for example in "Sing For Absolution". During Map of the Problematique and the solo of Thought Contagion), the Whammy is also synchronised to the click track allowing Matt to walk around on stage instead of controlling the Whammy pedal.

For a long time, FOH engineer Marc Carolan used a Midas XL4 and a Midas PRO 6 mixing desks along with a rack filled with:

As of Autumn of 2018, he switched to a smaller, more compact Avid Venue S6L 32D digital console, coupled with Midas XL48 pre-amps in three rack units (used for drums/bass/guitars/vocals) He still uses the outboard gear.

Additionally, he's also been seen using the Genelec 8020 reference monitors at rehearsals only.

Both Carolan and Adam Taylor (see below) use the same set up for the current Simulation Theory Tour, with three shared Stage 64, 128-Channel Mac Pro dual record systems. 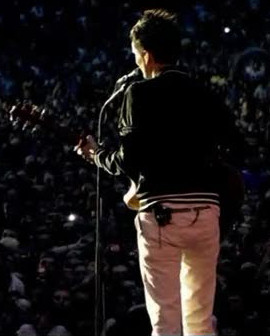 During last few tours, they have upgraded to Westone UM3 IEMs.

According to Taylor, the monitor engineer, they have tried every make and model of custom IEMs however the generic Westone IEMs always work for them, as they are lightweight, easily replacable and provide lots of consistent isolation.

The whole purpose of In-Ear Monitoring is to reduce outside noise so that the artist can listen to the mix at comfortable levels thus saving his/her hearing, and as each set are custom made to fit their ear perfectly, over 20dB of isolation is given. The wireless transmitters used to be Sennheiser G3 300.[1]They've now upgraded to the Senheiser 2000 transmitters.[2]

Also, Dominic has two L-Acoustics dV-SUB subwoofers[3] sitting behind him to add more low end to his monitoring needs and Chris has two d&b J-SUBs for the same reason.[4][5]

For The Resistance tour, e upgraded to a Midas Pro 9.

As of the Simulation Theory World Tour in 2019, he upgraded to an Avid S6L console.

The wireless units are Senheiser with a mixture of Neumann 105 and Senheiser dynamic capsules.

Before The Resistance world tour, Muse used an L-Acoustics V-Dosc system. As of The Resistance tour, Marc Carolan's PA system of choice are the d&b Audiotechnik J-Series speakers[6].

Additionally, for the Drones 360 tour, with the stage being in the centre, they were using d&b's array processing, allowing them to have an even coverage along the entire venue.

Currently, during the Simulation Theory World Tour, they use the following d&b set up:[7]

For a more in-depth tour of Carolan's set-up, click this link of a series of videos on mixing muse live, posted on Avid's YouTube channel.

Two maracas were used by Christopher Wolstenholme for the verse of "Endlessly" during the Absolution Tour.

Morgan Nicholls uses a cabasa during Supermassive Black Hole and Psycho, live. It was previously referred to as a "shaker" by fans, but when asked at the Royal Albert Hall gig on 12th April, 2008 he revealed that it was a cabasa. This has become a point of humour among Official Message Board members.

Used on "Screenager" and "United States of Eurasia", on which Matt described them as being "back with a vengeance".[8]

Since around the middle of The 2nd Law tour, Chris plays a Muse custom Lee Oskar harmonica, to play "Man With A Harmonica" as an intro to Knights of Cydonia. Before this, Chris was taping two diatonic harmonicas together as one alone couldn't achieve all of the notes needed for the song.