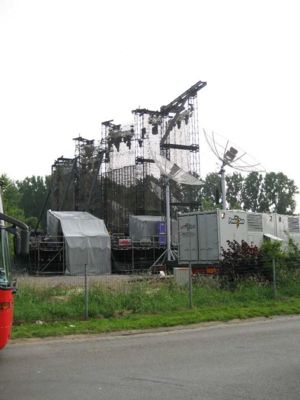 Both Forced In and Bliss were played for the first time after three months. It was also the last performance of Forced In to date.

A second show at Wembley Stadium organised due to selling out the first night.[4] Ticket sale started preemptively via ticketline, and was announced on BBC Radio 1 shortly after. Ticketmaster were the last officially referenced vendor to list the show. Ticket prices and booking fees were identical to the previous night.

The Klaxons were originally to support Muse on one of the dates, along with two other bands.[5] However, the validity of this claim was undermined with the news that the Klaxons will be playing at the O2 Wireless Festival in London and Leeds on the same dates.[6] There were also rumours of We Are Scientists supporting Muse on both dates but they had to decline "cuz doing them would’ve meant bumping back recording…”.[7] CSS were also rumoured to play and were even confirmed by NME (magazine) but the band later denied such rumours.[8] It was revealed on 1st June that Shy Child would be the opening act on Sunday 17th June.[9]

Early indications of set length varied between two hours and over two hours.[10]

It was revealed in late May that ticket vendors had mis-booked seated tickets,[source?] reportedly due to the front two blocks initially being given the green light to be booked.[source?] This effected block 126 and the opposite block.[source?] those who initially booked tickets were re-allocated to different areas, some one block away, and some as far as the rear of the stadium.[source?]

There were two golden circles at Wembley.[11] Wristbands for the circles were given out on a first come, first served basis.[11] 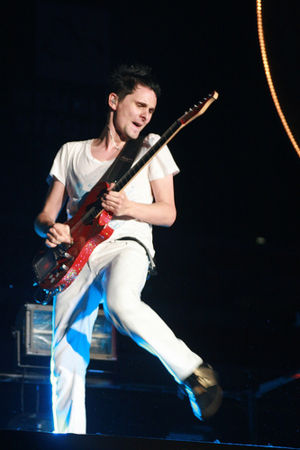 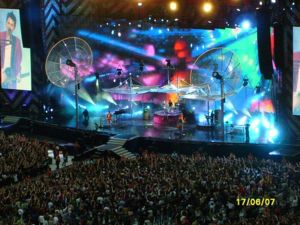 Press releases before the show stated that the band would play around 25 songs. They played 22 on the night with various interludes and riffs.

The stage consisted of two large screens either side of the stage and a "brand new video screen, which the wind can blow through!" (Chris Vaughan, Muse's production manager, speaking in NME 16th June 2007)[10] a mixture of pre prepared video and live video footage was used in the performance, including the words "No one's going to take me alive" etc. in Knights of Cydonia and "Loneliness be over" in Map of the Problematique. There were two platforms at each side of the stage that stuck out a little way into the crowd which the band used in various songs.

The band appeared from a scaffolding in the centre of the crowd on a rising platform accompanied by smoke and confetti. They walked through the centre of the crowd on a raised walkway to 'Montagues and Capulets', also known informally as 'Dance of the Knights' from Sergei Prokofiev's ballet, Romeo and Julliet. As they walked towards the stage along a runway, an "army" of men in yellow radio-active suits and hazard masks appeared (from underneath the middle/front of the stage). Only those seating, or standing at the front of the golden circle, could fully see these characters, as they walked infront of the stage at ground level towards the side of the stage in line, and were gone very quickly.

Dan performed during Knights of Cydonia. There was a costume change between New Born and Soldier's Poem.

Directly after Map of the Problematique Bellamy attempted to play the regular Maggie's Farm outro but the sound cut out causing him to run across the stage and fiddle with his pedal board but to no avail. Before Unintended Bellamy played a short riff on his acoustic guitar accompanied by bass from Wolstenholme. Two trapeze/aerial artists, one of which was called Robyn Simpson, suspended from large balloons performed during Blackout. These balloons were dubbed "heliospheres" on the set list. The usual balloons were released during Bliss. At the end of Plug In Baby Bellamy went towards the centre of the standing area, where they had previously come out. He finished the riff and then laid his guitar down on the runway. Security then gave it back to a member of the crew.

Throughout the show Matt Bellamy's guitars were delivered to him by a small robot with a guitar stand on it. As opposed to the guitar tech handing them to him like normal. At some point in the performance Muse played a short instrumental cover of Gravity's Rainbow by Klaxons.

SOUSOUS recorded the whole of both nights, 6 songs from the 17th gig can be found here in mp3 format. Part of the concert will be on H.A.A.R.P. CD/DVD.[23] An official Unintended video was released in H.264/MPEG-4 AVC format on the 24th of December in two resolutions - one for iPod and one for PSP.[22] Also, a 10 bar sneak-peek preview of Knights of Cydonia was released on the official website. 3 weeks later a 20-second clip of Supermassive Black Hole was released. The latest to be released was another 20-second clip of Feeling Good. At the same time Play.com released the whole first chapter of the intro. This can be found on Play.com and and Youtube.[24] 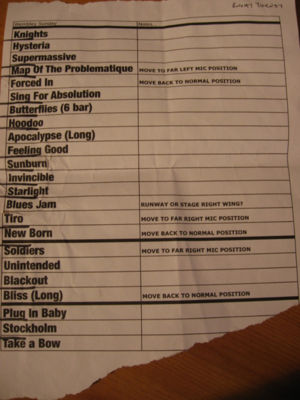