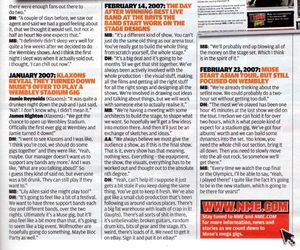 THE BAND DECIDE TO PLAY THEIR OWN SUMMER 2007 GIGS

DH: "It's amazing! We were very scared when we first walked in there. It's massive. We're glad we did go - we needed to go, because by seeing it, it completely changed our idea of what the show was to be."
MB:"It was a risk in terms of whether we could sell it out or not. It was a risk in terms of whether we could pull of a setlist and the whole show. But I think we're quite used to taking risks, so we sort of went for it really: 'Fuck it, see what happens.' I like playing poker, and I'd call it an 'all-in' move: 'Let's go all-in and see what happens'. What's the worst thing that could happen? No one comes, it's all crap, end of our career, go home and start again as a painter and a decorator. I can think of worse things!"

"It was a risk in terms of selling it out, but we're used to taking risks"

TICKETS FOR JUNE 16 SHOW GO ON SALE. THEY SELL OUT IN 45 MINUTES

Izzy Leckhart Smith (fan): "I set my alarm for 8:30am, I logged on to a site selling tickets and, with both me and the website on the brink of cardiac arrest, the clock ticket painfully towards 9am. I was NOT going to settle for some sinister area of Bloc 187 Level 5. Fortunately, thanks to a slip into 'Muse Obsessive Mode', I was soon the proud owner of a pair of standing tickets. I headed off to the forums and it was only then that I realised the true nature of my achievement."

DH: "We were in a tourbus somewhere in Europe, and it all happened while we were asleep. The decision to put on another day was made while I was in bed! It blew our minds, we had no idea. No-one expects that. It's like when we did those two Earls Court dates, we thought, 'There's no fucking way we'll do the second one'. So when the first one sold, and then the second one sold, it blows your mind."
AA: "It went out that we'd sold out in the first hour. And that decision had to be made about whether or not to add an extra date straight away. The hardest decision was if there were enough fans out there to do two."
DH: "A couple of days before, we saw our agent and said we had a good feeling about it, that we thought it would sell, but not in half an hour! No-one expects that."
MB: "I definitely didn't sleep very well for quite a few weeks after we decided to do the Wembley shows. And I think the first night I slept was when it actually sold out. I thought, 'I can chill out now'."

Jamie Reynolds (Klaxons): "It was quite a drunken night down the pub and I just said, 'Nah'. I don't know why, I didn't mean it."
James Righton (Klaxons): "We got the chance to open up Wembley Stadium. Officially the first ever gig at Wembley and Jamie turned it down!"
DH: "I went to see Klaxons and I was like, 'I think you're cool, we should do some gigs together' and they were like, 'Yeah, maybe. Our manager doesn't want us to support any bands any more.' And I was like, 'What are you talking about?' So I guess they kind of said no, but everyone was a bit drunk. They can still play if they want to."

MB: "It's a different kind of show. You can't just do the same old thing as our arena tour, You've really got to build the whole thing from scratch yourself, the whole stage."
DH: "It's a big deal and it's going to be months 'til we get that shit together. We've always been involved with the whole production - the visual stuff, making all the films and getting all the right stuff for all the right songs and designing all the show. We're involved in drawing out ideas and talking about things, but we will work with someone else to actually realise it."
MB: "We're having a meeting with some architects to build the stage, to shape what we want. So hopefully we'll get a few ideas into motion there. And then it'll just be and exchange of sketches and ideas."
AA: "We always believe we must give the audience a show, as if this is the final show. That is it, every show has that meaning, nothing less. Everything - the equipment, the show, the visuals, everything has to be worked out and thought out to the absolute nth degree."
DH: "Yeah, can't help it! I suppose it just gets a bit stale if you keep doing the same thing. You've got to keep it fresh. We've also got like a small club production that's been following us around various places. There's a big fat warehouse with loads of crap in it! (laughs). There's all sorts of shit in there, it's unbelievable: broken guitars, random drum kits, bits of gear and the stage. It's weird, there's loads of it. We need to get it on eBay. Sign it and put it on eBay!"
MB: "We'll probably end up blowing all of the money on the stage set. Which I think is in the spirit of it."

MB: "We're already thinking about the setlist now, we could probably do a two-hour set without getting too dull."
DH: "The most we've played has been one hour 45 minutes at the last show we did on tour. I reckon we can hold it for over two hours, which is what people kind of expect for a stadium gig. We've got four album's worth and we can build some dynamics into the set. You know, you need the whole chill-out section, bring it all down. Then you need to slowly move into all-out rock. So somehow we'll get there."
MB: "Every time we watch the cup final or the Olympics, I'll be able to say, 'Yeah, I played there!' I quite like the fact it's going to be in the new stadium, which is going to be there for years!"