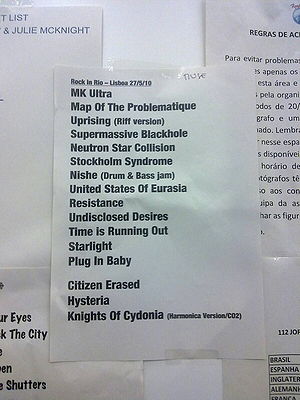 This concert was announced on the 4th of December.[1] Muse were the first band confirmed band for the festival[source?] and headlined the main stage[2].

This was also the first concert on Muse's The Resistance tour summer leg in the UK and Europe; the most voted songs on the official site's poll were Citizen Erased, Bliss, Showbiz, Butterflies & Hurricanes and Assassin. Citizen Erased was chosen by the band and consequently played.

From later to earlier