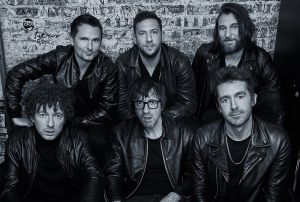 The Jaded Hearts Club, formerly known as Dr. Peppers Jaded Hearts Club Band, is a British-American cover supergroup. Its founding members include Matt Bellamy, who plays bass and does backing vocals, Sean Payne of The Zutons on drums, Jamie Davis on guitars, and Nic Cester of Jet on vocals. Other members who joined soon after the band kicked off and often make appearances include Ilan Rubin of Nine Inch Nails, Paramore, and Angels & Airwaves; Graham Coxon of Blur on guitars; and Miles Kane of The Last Shadow on vocals. Members who have only had one-off supporting appearances so far include Chris Wolstenholme (guitar) with Chris Cester (also of Jet) on percussion, Anthony Deane on guitar, Paul McCartney on vocals, and Abi Harding of The Zutons on saxophone.

The band started its journey when Bellamy gathered his friends to play at Dom Howard's 40th birthday party with no intent at that time of forming a proper supergroup. Due to the great fun they had, they continued to jam together and were soon invited by Stella McCartney, Paul McCartney's daughter, to play at the launch of her private fashion event called Stellabration with Beck, St. Vincent, Leon Bridges, Borns and Grimes also in the line-up. With many celebrities such as Amy Poehler, Christina Aguilera, Selma Blair, Ringo Starr, and Paul McCartney (who joined the band on-stage) in the audience, videos of the performance quickly surfaced on the internet.

Later, the band played several more gigs, including the performance at the Teenage Cancer Trust in London's Royal Albert Hall, the SXSW festival in 2018,the Madame Siam, and the HVAC Pub. Their performance at The 100 Club in March 2019 was released as their debut live LP in early 2020. In late 2019, after Muse finished touring, Bellamy, Payne, Davis, Kane, Cester, and Coxon convened in a studio and recorded a set of their first studio songs: a cover of Isley Brother's "Nobody But Me," released on March 2nd, and a cover of Marvin Gaye's "This Love Starved Heart of Mine (It's Killing Me)," released on April 15th. Both songs can be heard on their YouTube Channel.