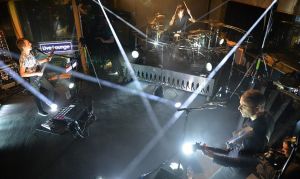 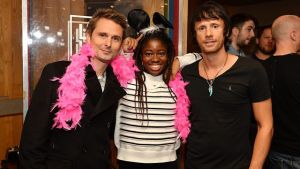 Matt and Dom with Clara Amfo

Second performance at BBC Radio 1's Live Lounge since 2012, this time in support of Drones.

Muse have played an extended session for the BBC Radio 1 Live Lounge Month at Maida Vale Studios, presented by Clara Amfo. A small audience was also present in the studio.

Psycho's "motherfucker" was censored, allowing the song to be played live.

The entire show was recorded and can be seen here.

The Manson M1D1 Stealth was used for the first time.