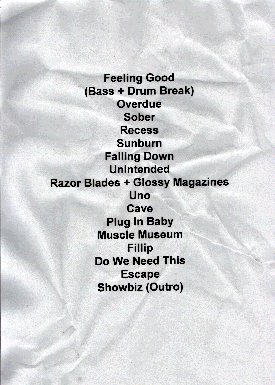 The setlist of the gig. 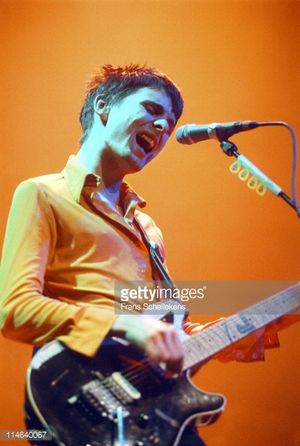 Matt during the gig.

This concert marked the first known time Muse played Plug In Baby, and also the first Screenager (under the title "Razor Blades and Glossy Magazines") and Nishe live (under the title "Bass and Drum Break"). Feeling Good was also performed in public for the first time, months after it was debuted on BBC Radio 1 in September 1999. The original support band, possibly JJ72,[4] dropped out just before the show began.

Matt's voice was described by one reviewer as the highlight of the show, while simultaneously stating the lyrics were "incomprehensible".[5]

The live version of Sober from this gig appears on the Unintended cassette and 7" and on the BX CD. The live versions of Fillip and Do We Need This appear on the Random 1-8 EP. A full audio recording in lossless quality can be found on MuseBootlegs here as well as below.