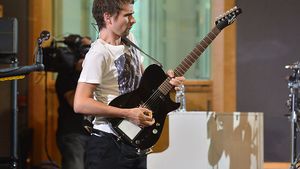 This is the third of six Manson guitars created by Hugh Manson for Bellamy in 2012 for The 2nd Law touring.

It first appeared at the French Taratata TV Programme on the 19th of September 2012.

This guitar was duplicated as the Manson M1D1 Gloss Black 2.0.

Along with the Manson Matt Black, it was the most frequently used guitar on The 2nd Law Tour. It was often smashed after Uprising or Stockholm Syndrome. The varnish shows some scratches, that are partly fixed with gaffer tape. At the top of the headstock is also a big scratch.

As of the beginning of the Psycho UK Tour it seems that this guitar was replaced by the Manson M1D1 Gloss Black 2.0, however it was seen being used live again at the May 8th 2015 Webster Theatre gig. The guitar was repaired by Tim Stark in 2015 and sent back to Matt in time for the US shows.

While this guitar sat in Rig A for the US shows, it was also seen in Rig B for a couple European festival shows. The guitar was labeled number "4" by Matt's tech. It was used until 2015.