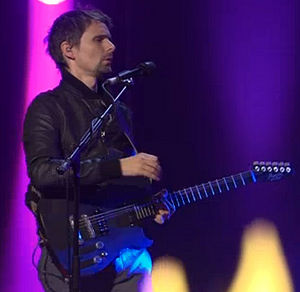 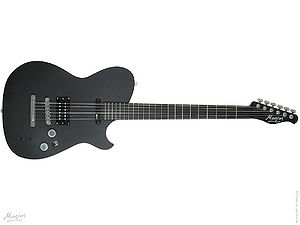 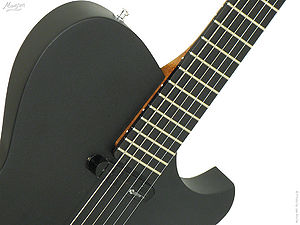 Check out that neck! 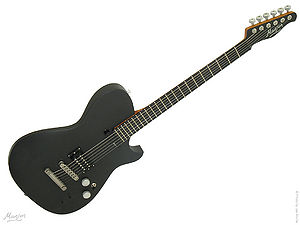 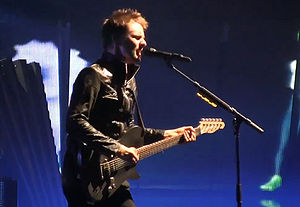 This guitar appeared at the Stockholm STV TV Programme on TV on the 14th of September 2012. Like the Manson Carbon, this guitar does not feature a X/Y midi controller pad, which is a change from a majority of Matt's Resistance era guitars.

The guitar had to match a specific weight requirement (around 2.4kg) so multiple holes were drilled into the body, neck (routed), hardware to reach the target weight. This is the lightest guitar Hugh has built for Matt. This is the second of six Manson guitars created by Hugh Manson for Bellamy in 2012.

It features the custom knobs and machine heads in nickel of the Manson Delorean, but with 5/6 holes drilled into them at the back to reduce the weight.

Also it is nearly identical with a bunch of other Manson Matt Blacks from a batch series, that Matt uses for smashing around. The key difference between this guitar and the multiple Matt Blacks used for smashing is that is features a drier velvet satin finish, compared to the textured satin black finishes found on the guitars used for smashing. Neck material and fingerboard choice is also different (Maple vs. Birds-eye maple and Rosewood vs Ebony).

Along with the Manson M1D1 Gloss Black, it was the most frequently used guitar on The 2nd Law tour.

On the April 10, 2013 Toronto gig this guitar featured a new (natural) maple neck. It was thrown out of the pyramid the evening before during the outro of Stockholm Syndrome. A video of the incident can be seen here [watch].

Since the beginning of the Unsustainable Stadium Tour, the guitar featured a new natural maple neck with a rosewood fingerboard and a black headstock.

For the Psycho UK Tour Matt used this guitar for nearly all Drop-D tuned songs, and also tossed it around several times. A picture showing some damages to the guitar, Matt commented with: 'For those concerned, guitar is totally fine, I'm using it tonight, it's taken much worse. Manson guitars are built to last; military grade...'

This guitar was used again for some song during the Europe festival shows.

Pictures of the Manson Matt Black on the Mansons Guitars Website