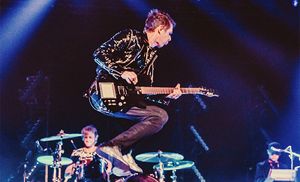 The guitar has replaced the Manson M1D1 Gloss Black, while it was getting repaired. It features the exact same specifications, except it has a black bridge, a chrome X-Y pad frame, an uncovered humbucker and the truss rod adjuster at the end of the neck.

The Gloss Black 2.0 was labeled number "4" on his strap by Matt's tech during the Drones festival tours, but had no label during the two 2018 shows it made an appearance on.