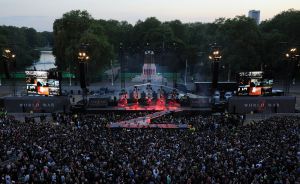 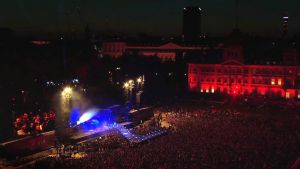 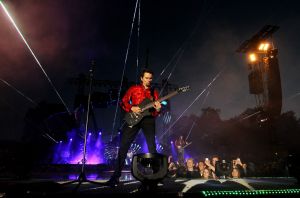 The band's connection to the movie and it's premiere was first teased via a short "MuZe" YouTube clip uploaded by the band on May 21st 2013.

It was then anounced on May 24th, 2013, Muse performed at the Horse Guards Parade as part of the World War Z movie premiere. Muse provided two songs off of The 2nd Law for the movie, one of which is the occuring main theme (Isolated System). Subsequently, the band were invited to play a special one-off gig as an "after party", following the premiere of the movie at Leicester Square in London.

Tickets were available in pairs on May 28th, 2013, for free from Ticketmaster via a unique link that required either of the codes 'MUSEFC', 'MUSEFB' or 'MUSETW' depending on whether your code was from the fan club, Facebook or Twitter. The link was accessible on Ticketmaster, WWZ website, official Muse email list and partner promotions.

After Knights of Cydonia, the band said goodbye and left the stage. After a minute or two, the band took to the stage with Bellamy claiming "We have a few more minutes. David Cameron needs to go to bed soon! This song is especially relevant". There were no visuals on the screens during the last song, suggesting that the encore was unplanned.

The stage was an one-off build, with the shape of it, if looked from the birds-eye view, resembling a big "Z". Some pyro was also used during the show.

This was also the only time that Isolated System was played entirely from tape as opposed to Morgan performing it.

The gig was filmed for release by Paramount Pictures and Redrocks Production Co. with some of it released as a pro-shot. The individual songs released and available online can be watched by clicking on links in the setlist below.

The show was also aired on TV as part of Jimmy Kimmel Live! on June 20th, 2013. Additionally, the Follow Me performance was aired as part of The Jimmy Kimmmel Show. (watch)