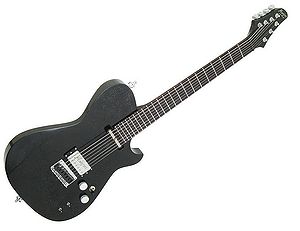 This new 7 string is the fourth of six Manson guitars created by Hugh Manson for Bellamy in 2012. The guitar had to match a specific weight requirement (around 2.4kg) so multiple holes were drilled into the body, neck, hardware to reach the target weight. This guitar has no Kaoss pad controller and does not seem to have any additional electronics, which is a departure from Matt's Resistance-era guitars.

This is also one of Matt's first guitars to feature a Sustainiac.

This guitar is featured in the Supremacy music video.

This guitar was first used for the debut live performance of Supremacy at the 2012 Cologne gig. It was later used for performances of Liquid State, Survival and also Citizen Erased.