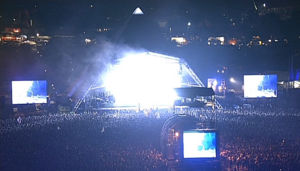 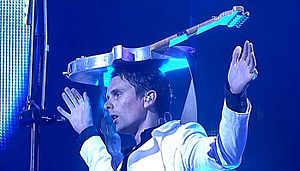 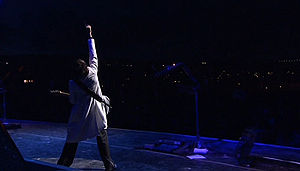 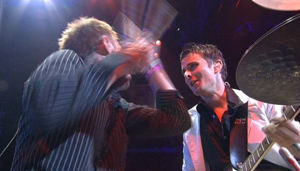 Bellamy and Howard jamming together after Stockholm Syndrome 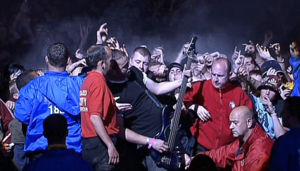 Christopher Wolstenholme in the crowd after Stockholm Syndrome

One of Muse's biggest gigs of the Absolution tour, in which they headlined the Glastonbury Festival for the first time.

After Stockholm Syndrome, Dominic Howard's dad collapsed with a heart attack and died on-site. This was a very sad and hard time for the band.[1]

Matthew Bellamy performed the Shuffle Dance during Time Is Running Out. During the end of Stockholm Syndrome the microphone on Howard's snare drum fell off—Bellamy pulled most of the drum-kit away. The stage was destroyed at the end of the gig.

At the end of Stockholm Syndrome Christopher Wolstenholme jumped into the crowd, playing the Execution Commentary riff from there before throwing his Pedulla RB5 back onto stage, and finally running it through the head of the bass drum.

At the end of Blackout when Matt puts his guitar on his head, you can see that his ring finger is bleeding.

The full gig was broadcast in real-time on digital television and a recording of that is available on an online torrent. Bliss, Time Is Running Out, Plug In Baby, Blackout and Stockholm Syndrome were shown on BBC2. The Absolution Tour DVD does not include Citizen Erased nor Stockholm Syndrome. An audio rip can be found on Microcuts and on Muselive.com here[registration needed].