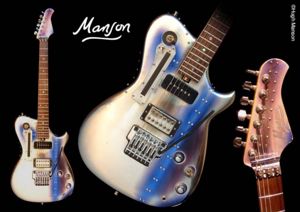 Hugh Manson on the Bomber

Bellamy said, ‘We're on tour in four weeks time and I need a guitar with a tremolo on’. He said he wanted a rounded-off version of the first guitar with a mirror finish. I didn't have the technology to chrome-plate wood, or the time, as I was in Japan teching for John Paul Jones at the Guitar Wars project with Steve Hackett, Nuno Bettencourt and Paul Gilbert. So I got hold of the only guy I know who could do the mirroring, Martin Sims, and said, I need this guitar done incredibly quickly. Martin had the body for just two weeks to chrome plate and, because he had no time to do it properly, it came back with flash points where the mirroring hadn't worked and loads of bubbles in the topcoat. By this time the band had started their tour, but I looked at it and decided I could do something with it. I went to the local scrap yard and bought some rivets that came from an airplane. I don't know which one but on the box it said ‘1945’, so they're Second World War aluminium probably from a Spitfire or something. I decided to drill a load of holes and put rivets in to make it look like it was made from sheet metal. Then I went to town with an airbrush making it bluey purple. I was trying to make it look like a sort of burnt wing of a B52 bomber, I suppose. Luckily it turned out amazingly and it sounds awesome. It's funny how something that starts out being a good project, goes through this potential disaster stage and comes round to being a massive success.

This guitar featured on the US version of the "Hysteria" music video. It also featured in the music video for "Starlight".

The MIDI strip is actually a ribbon controller from a JP-8000 keyboard.[1]

The guitar features an Ibanez Superstrat neck and is the only Manson guitar without a Manson neck to date.

This guitar was sometimes used live for Starlight, but only when Matt played the main melody, instead of Morgan on the Keyboard. This guitar was often used during the 2004 Absolution Tour. The Manson Bomber was used for the last time at Werchter in 2006 and was succeeded by the Chrome Bomber.