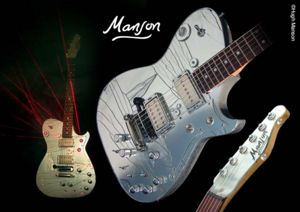 Article on the Laser in Total Guitar's July 2015 issue

This guitar was designed by Hugh Manson. In terms of specs, it is identical as the Manson Delorean, but it includes a mirror/aluminium finish and lasers in the body.

Hugh Manson on the Laser Manson

"The laser one was my idea. I was driving past Heathrow airport one night and I saw these planes coming in with their headlights on. I thought, ‘That's what you need, put the lights in the guitar’. I researched lights and found you could only really do an LED thing and then I thought, ‘Lasers, that's it’. I bought a load of lasers and some crystals and gratings to shine them through, and achieved this guitar. At the time the band were about to play at the Reading Festival so I went hell-for-leather to get it ready for that. It's got a cracked mirror finish. I bought an 8 x 4 sheet of mirror plastic, jumped on it, and then stuck it on the front. When I stuck it on it looked absolutely awful, it looked too new. I took a bit of a risk and poured a load of thinners on the wood inside the guitar and it seeped through and kind of destroyed the mirroring on the back of the plastic to make it look like an 18th century mirror. It looked way better.

"The lasers are connected to a little micro processor so that the harder you play the more of them come on. The only trouble with them is that you need smoke, as the lasers are useless without smoke or dark. And if you're a singer the last thing you want is smoke. He did use it at Reading and it did look really good but it still hasn't been used to its full potential. And of course, musically, sticking a lump of plastic on the front of a guitar and filling it with lasers and God knows how much wire, is probably not the best thing for it sonically. And it's really heavy, about half as much again on a Les Paul."

The Laser is, so far, the only one of Matt's guitars with lasers.

The guitar's debut live appearance was in Oslo, in 2002. Despite the guitar being heavy, it was used for a fairly hefty amount of time, good five years. The last time it was used was at the NYC gig in 2007.