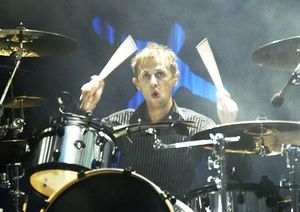 Local heroes Muse saw Glastonbury out for another year with a truly mesmerising headline set on the Pyramid stage, but the celebrations were cut short by the sudden and tragic death of drummer Dom's father, backstage at the festival.

According to an official report, "Dominic Howard's father collapsed on site at 1.15am and died shortly after. Avon and Somerset Police are not treating the death as suspicious. In this dreadfully difficult time, we request that the privacy of Dom’s family and friends is respected. Our sincere and heartfelt sympathy extends to Dominic and the Howard family."

Muse immediately cancelled a show in Bergamo, Italy, on Wednesday June 30, pending a decision on their other touring commitments which include festival appearances at Roskilde in Denmark, Oxegen in Ireland and T In The Park in Scotland (July 10).

Headlining on the final night of Glastonbury, they played a set drawn heavily around their most recent two records to quite astonishing reaction. Recent hit ' Time Is Running Out' and the Bach-cutting ' Plug In Baby' were the stand-outs.

Over on the Other Stage, Orbital impressed with a greatest hits set, but it was Matt Bellamy's maniacally operatic rock that stunned 60,000 muddy fans. Sunday had been a mix of heavy showers and occasional sunshine.

Earlier, Morrissey had brightened up the evening with his recent return to form while Goldie Lookin' Chain challenged VF to a drinking competition before playing on the Dance Stage.

There were over 140,000 people on site over the weekend, which also feature Paul McCartney's first ever festival performance. Stay tuned to VF for the most extensive review coverage and photos.

Go back to Virtual Festivals