After all the controversy over which act better deserved to headline the Pyramid Stage, Muse prove their place by sending things space-wards ... while Orbital just send us off.

Cryogenically frozen in the Glastonbury hall of fame and playing their last ever English gig before wrapping up their decade of decadence at T in the Park, expectations are atmospherically high for Orbital (10.30pm, Other Stage), so perhaps slight disappointment is inevitable. 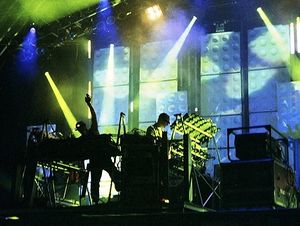 Despite telling the crowd ‘We love you’ between almost every track during an emotionally charged set, perhaps the occasion gets to the Hartnoll brothers. Because for all the hype (a number of die-hard fans petitioned festival organisers demanding their heroes headline the Pyramid Stage instead) something special is distinctly lacking, at least until the encore when an extended version of rave anthem ‘Chime’ simply refuses to go away. 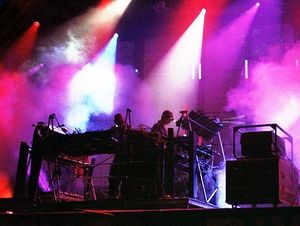 Before that, we’re treated to a stunning version of ‘Lush’, cut-up among interweaving a capellas of Bon Jovi’s ‘Straight To The Heart’, Belinda Carlyle’s ‘Heaven Is A Place On Earth’, and The Darkness’ ‘I Believe In A Thing Called Love’. ‘Satan’ squelches harder than our wellies in the soggy mud below and new tune ‘Acid Pants’ provides another excuse to swing ours about manically.

But throughout it all, there is the feeling that this massive send-off should have had just a few more rabbits in its hat. It’s methodical and almost bland. Sure, we all have a great dance and embrace the occasion with zest, but we’re much more concerned that this is our last night at Glastonbury than by the fact we’ll never get to see Orbital again. 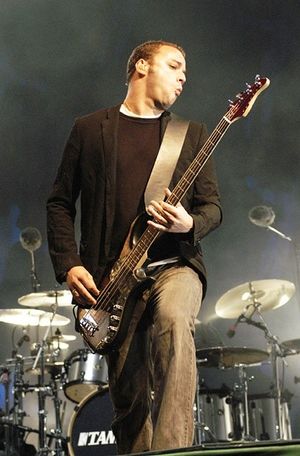 Having seen Muse grow from beneath the confines of student union indie, through club tours, festival slots and arena headline shows, it’s with a dual sense of sadness and pride that we watch Muse totally blow Glasto out of the mud and into another cosmos. Clearly, the monumental size of the crowd means that it’s a rather impersonal showing but its one which Muse take in their stride.

Let’s not understate things though. This isn’t Foo Fighters, round the houses, telev-rock and it’s not the fucking Ordinary Boys. This whipping inferno of Muse's monstrous, operock tail is tickling god's arse and setting cathedrals across the land on fire. 'Sing For Absolution' is the sound of church bells crying and a thousand ambulances falling from the sky. Each song is a package to hell containing the wretched carcass of a different band Muse have devoured amid their feverish creative lust: Queen, Rachmaninov, System Of A Down and of course Jeff Buckley. ‘Bliss’ and the amazing finale of ‘Stockholm Syndrome’ are hypnotising pieces of psalm metal that really should be the envy of the musical world. 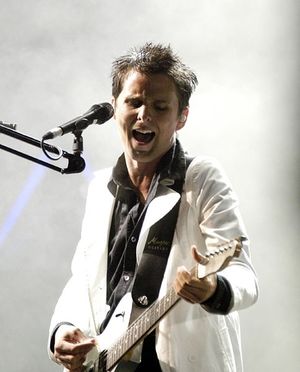 Typically, Matt Bellamy says little. Cloaked like the anti-vampire in a long white mack, he postures and preens like Hendrix fighting the soul of Freddie Mercury. But while The Darkness are a bad joke, Muse come out blasting like Moses on top of a mountain. There’s never any let up, from the apocalyptic whirlwind of ‘Newborn’ through the ‘pop’ of ‘Sunburn’ to the Bach-juggling metal re-working that is ‘Plug In Baby’. It’s the best gig of their lives, but Muse are nerveless and clinical and all the better for it.

As their pint-sized singer switches between bashing his light-straddling space station piano to whipping venomously across the stage, laser gunning solos like a Starship Trooper, the crowd’s a mix of silent awe and muddy moshing. ‘Time Is Running Out’s dark disco is the nearest we get to a sing along, but it’s not about anthems - leave that to the northerners - Muse clearly are as far above planet Earth as anyone could ever hope to be.

Go back to Virtual Festivals