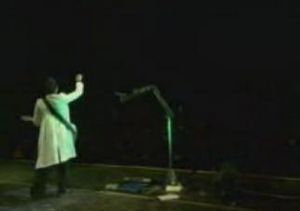 The Shuffle Dance is the fan dub given to one of Matthew Bellamy's stage theatrics. It consists of Bellamy shuffling his feet so as to appear to be sliding across the stage. It appears to have been created as a part of the "Micro Cuts" puppet strings routine that was used between the start and the first verse in some concerts on the 2002 tour, an example of which can be seen on the Rock am Ring 2002 video.

One example of it being used on the Absolution tour can be seen on the DVD with the same name, during "Time Is Running Out" at Glastonbury 2004. It can also been seen in the Brit Awards performance of "Hysteria".

Bellamy's first known use of the shuffle during the Black Holes and Revelations tour occurred during the 11th September 2007 concert in the Lifestyles Communities Pavilion, right before a performance of "Supermassive Black Hole". The move can also be seen in live recordings of "Knights of Cydonia" at Reading Festival 2006. You can also see it being used in Time is running out, in some cases on the resistance tour, yet whilst doing so there is no spotlight on Matt and so can't be easily seen.

After years of assumed retirement, Matt brought the dance back briefly in 2018 during some promotional performances of Pressure.

The shuffle dance was an idea emulated from Jamie Crowe (ex-Rootjoose guitarist) when Muse supported Rootjoose.[1]

Songs Bellamy has shuffled to