MuseWiki, wiki for the band Muse
(Redirected from Absolution)
Jump to navigation Jump to search 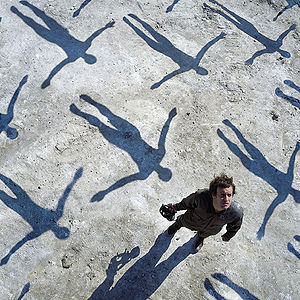 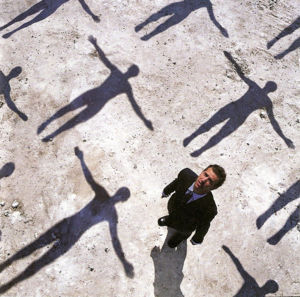 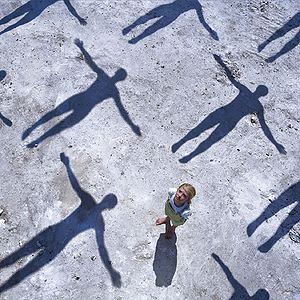 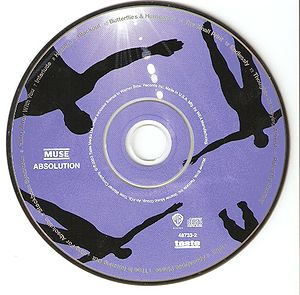 Absolution is Muse's third album and was released worldwide during September 2003. The songs featured on Absolution were written whilst Muse toured in support of Origin of Symmetry and Hullabaloo, with some songs such as " Fury" originating as early as early 2000. Like the previous Muse album, Origin of Symmetry, Absolution is influenced by classical composers such as Sergei Rachmaninov and Samuel Barber, whilst "Endlessly" introduces a more electronic sound with songs such as " The Small Print" and " Thoughts of a Dying Atheist" being guitar-led.

At the beginning of the album Matt started to writing songs about mundane home matters, according to Matt: "Showbiz was a bit of teenage angst, "Origin of Symmetry" was about going on tour all the time and losing connection with our family and friends so we don't really know anyone apart from ourselves and even ourselves we didn't know anymore and "Absolution" is more about us being personable, about us being normal people at home"[5]

Matt said that he started to experience violent mood swings in the studio: "The album goes from being the most amazing music I've heard in my life to the most laughable piece of shit I've ever heard within the space of a couple o minutes; I was moving between the extremes of doubt and absolute ridiculous confidence. There are moments when you, the rest of the band, the producer and the assistant producer all look at each other and think 'what the fuck are we doing? we've completely lost the plot'[5]

Matt explained that the songs are more "uplifting", mostly because he has fallen in love as he said: "I'm not married yet! But I've been drawn into this Italian world. I met this girl from over there so I'm into all that" Also in the same interview he said: "I think there'll be some songs that are straightforward rock, some of my favourite new songs are like ABBA!"[6]

In an Interview about the name of the album Matt said: "I think the absolution is not necessarily a religious word; It has meanings of purity, but it's not necessarily talking from a Christian or any particular religious point of view. I think it's just suggesting that the act of making music is a way of understanding things." [7]

During 2002, Chris was quoted saying that the third album would be called "Universal Melodies". This would later be changed sometime into development.[8]

The album was recorded at Grouse Lodge Studios in Ireland and AIR Studios in London during 2003.[9], the songs " Fury"[10] and " Soldier's Poem"[11] were originally intended to appear on Absolution. Whilst Matt wanted to keep "Fury" on the album, it was dropped in favour of " The Small Print" as per Dom and Chris's preference,[10] and it became the Japanese bonus track and B-side to "Sing for Absolution". Matt suggested in 2008 that this was because the band did not like "Fury" as much after playing it live before the album's release.[12] "Soldier's Poem" was ultimately reworked for the follow-up to Absolution, Black Holes and Revelations.[11] Rich Costey began producing Absolution after a the tracks " Blackout" and " Butterflies & Hurricanes" were recorded with Paul Reeve, who co-produced Showbiz and John Cornfield, who engineered Showbiz and Orgin of Symmetry.[9]

The promo CD-R is encrypted so that the tracks cannot be ripped, and instead contains software through which the tracks can be played.

There was a limited edition of Absolution released that featured a bonus DVD. The DVD had 40 minutes of 'The making of Absolution' footage, as well as pictures to view. Some editions of Absolution, including the limited editions, had inlay errors when it was released in September; the positions of "Interlude" and "Hysteria" were switched on the track list.[13] These could be returned and replaced with corrected inlays, although many were kept for collectors value.

The first single, "Stockholm Syndrome", was released on the 14th July 2003.

The Australian re-release contained an extra disc, featuring 6 tracks from the Big Day Out 2004 (23rd Jan 2004) in Sydney.

The album has gone double platinum in the UK since its release[14] and had been certified gold in the US.[source?]

Absolution was reissued in double 12" vinyl on the 18th of August, 2009 to commemorate the 10 year anniversary of the debut album, Showbiz.

The artwork was designed by Storm Thorgerson. Dominic Howard: "The artwork can either been seen as people coming down to Earth or leaving the Earth, it's open to interpretation".[15]

(Excerpt from 'Taken by Storm - The Album Art by Storm Thorgerson') "Commissions come in many different ways and this one arrived via the very wonderful Internet, insomuch as Dom, the intrepid drummer of Muse, discovered a rough on our website which he thought might work for them.

We met with Dom and agreed that we should try and render our pencil sketch as a real event: shadows of flying people spread across the ground as if cast by a squadron of flying craft, magical beings swooping over the Earth to the amazement of the viewer on the ground looking up. it is a though he is witnessing some mystical event, a visitation of strange beings, which can only be inferred by us, the viewers of the picture, because all we see are shadows, whereas the viewer of the picture seems them for real, gliding serenely overhead. He is deeply moved and experiences a kind of absolution as one might in the presence of a such a miraculous sight.

The other thing I hoped the band liked as much as I did is the pattern made by the shadows which has, I feel, the appeal of all patterns, namely the symmetry, but not the meaningless repetition of wallpaper. I had imagined that these flying beings were like the strange creatures of our a children's story by Maurice Sendak, whose illustrious I much admired. It seemed important to maintain a texture in the ground, holes, pebbles, striations, etc, to provide a 3-D backcloth upon which the shadows could fall. A chalkpit was deemed appropriate since Muse had spent much of their teenage years hanging out in the chalkpits near their Devon homes. Doing what? I’d like to know.

In pursuit again of the avowed philosophy of ‘doing it for real’, we made cut-out shapes from hardboard and fixed them on top of tall poles, took them to a chalkpit near London and photographed them in strong sunlight, thus to cast definite shadows. All very well you might think, except for the typical, crappy English weather, unpredictable yet grey, which meant we had to shoot this three times.

I felt ‘absolved’ through the endeavour."

Matt expressed on separate occasions in 2015 that The Groove and Fury should have been released on the album.

All songs are instrumental versions