MuseWiki, wiki for the band Muse
(Redirected from Origin Of Symmetry (album))
Jump to navigation Jump to search 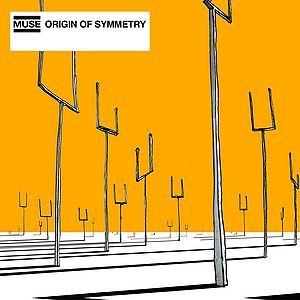 Origin of Symmetry came first about through the changes Muse underwent during their intensive touring in promotion of Showbiz, with a lot of material written whilst touring.[2] However, this album is more riff orientated and slightly darker than Showbiz, containing several songs which use piano or organ. Origin of Symmetry was intended as a more progressive rock-styled album,[2] with different vocal styles than that of Showbiz. The ambition behind the album was to show the harder rock and eccentric elements of the band, that they felt had not been seen so far.[2] This included bringing back a lot of music "filtered out" from Showbiz.[2] The bass in the album is also more prominent and distorted. Some of the songs of the album draw influence from the band members' relationships suffering from the effects of them being on tour.[2]

The name of the album was inspired by the book Hyperspace by theoretical physicist Michio Kaku. It discusses how a future book about the discovery of supersymmetry should be entitled "The Origin Of Symmetry", due to its implications in physics, in reference to the explanatory impact Charles Darwin's "On The Origin Of Species" had on biology.[2]. Matt said: "The name of the album, 'Origin Of Symmetry', is from a book about geometry of the universe and how it's all in beautiful balance, a perfect thing in ten dimensions. It explains all the mysterious forces we invented religions around.[3]. According to Bellamy, "everyone’s been writing about the origin of life so now they’ll start looking at the origin of symmetry; there’s a certain amount of stability in the universe and to find out where it originates from would be to find out if God exists.”[4] 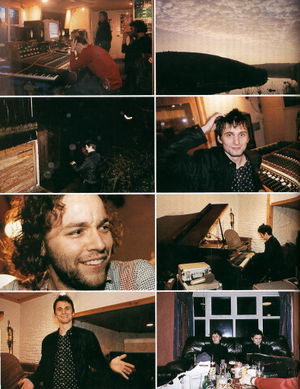 "New Born", "Plug In Baby", "Bliss" and "Darkshines" were recorded with David Bottrill in the middle of touring in late 2000, in Ridge Farm Studios, Surrey.[2] The songs were recorded as if in a live situation, within a few days.[2] The band later had to re-master the songs with John Cornfield after the tour was over, in order to make them suitable for release, as they were not satisfied with the mixing of these tracks.[2] Matt attributes this to the effects of the hallucinogenics, which were "great for exploring new territory", but "certainly not good for finishing things off".[2] The stripping down of these songs helped set the tone for the recording of the rest of the album. "New Born", "Plug In Baby" and "Bliss" were seen as the "backbone of the album" and provided a basis from which the band could be more experimental with the other songs.[2]

John Leckie pushed the band to explore some of the more experimental ideas. Some of this took the form of using new percussion for particular songs, such as using a balafon, as well as animal bones and llama toenails on "Screenager".[2] Matt felt this was necessary in order to for him to write the lyrics for the album.[2] Classical music also began to have a great impact on the writing of songs for Origin Of Symmetry, particularly on the way Matt perceived music itself.[2] The song "Space Dementia" was inspired by Sergei Rachmaninov, whose music Matt began to listen to whilst writing the album.[2]

"Feeling Good" was included on the album because it was a piano based song, and was a favourite of a girlfriend Matt had at the time.[2] The standard release of the album was also originally intended to include many songs that would later become B-sides, including "Shrinking Universe", "Tesseract" ("Futurism") and "Natural Disaster" ("Nature_1"), as well as unidentified songs entitled "Origin of Symmetry" and "Love Bleach".[5][6]

The promo CD sits in a flat plastic box with a Muse logo on it, which is held together by screws in two corners of the case. The aforementioned CD originally came with a perspex screw driver. Two versions of the promo CD were distributed in the UK. These two versions only differ in the plastic the box is made from; one tinged yellow and the other grey. A similar promotional CD was used in France, some copies of which were distributed in plastic boxes as with the UK version.

The track list on the UK promo CD has incorrect track lengths for all tracks, but the audio is identical to the released album. Unmastered promo CD-Rs were distributed in the UK and Germany. The Bleeb Unmastered and German CD-R promos are unmastered and have beeping sounds every few minutes to indicate the CD is a press preview copy. The unmastered promos feature uncut versions of the songs, for example, "Bliss" has a 30 second appregiated outro that is not featured in the released album version, and "Citizen Erased" does not merge into "Micro Cuts". Additionally the Exclusive Advanced Promo CD was distributed in Germany, and contains six faded song samples from the album.

Origin of Symmetry was to be released in the US on the 28th August 2001[1] but the release was cancelled after Muse left Maverick. It was finally released in the US in 2005 after Absolution became successful there. It was the only Muse album not to be released on Ukrainian Records in Ukraine, and was instead released directly under Motor. Thus, it did not have a promotional cassette like other Ukrainian Muse releases.

The album was originally released as a CD-ROM with the MuseTV feature linked to online bonus material. This later ceased to function once the MuseTV media had been removed from the Internet. The CD was available in either a digipak or jewel case.

Origin of Symmetry was reissued in double 12" vinyl on the 18th of August, 2009 to commemorate the 10 year anniversary of the debut album, Showbiz.

In a 2001 interview, Matthew Bellamy stated that the artwork is "a collection of the work of 14 artists who’ve all been given that same title, so even though each piece is in a radically different style, you get a sense of there being some form of continuity through different people’s perceptions of the same theme."[7] 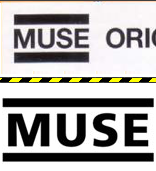 The album art displays a slightly irregular version of the Muse logo. While the regular one utilizes the Frutiger Black typeface, this altenate version is set in Helvetica Bold.

All tracks are unmastered and unblended versions 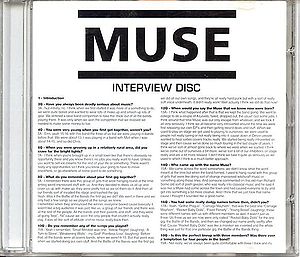 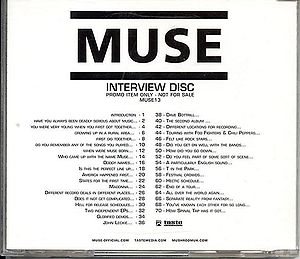 A promo CD featuring an interview with the band.