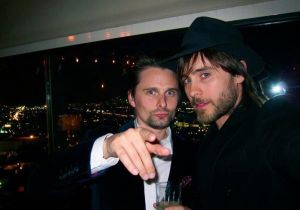 Matt Bellamy and Jared Leto in 2012

The band has been formed in 1998 by brothers Jared and Shannon, who have been playing music together as a duo. The band later expanded when guitarist Solon Bixler and bassist Matt Wachter joined the line-up. Together, they've recorded their debut self-titled album in 2002. In 2003, Bixler left and has been replaced by Tomo Miličević (lead guitar, later bass, strings, keyboards and other instruments). They later recorded and released their second LP called A Beautiful Life in 2005. Before releasing their third LP called This Is War in 2008, Wachter left and was replaced by a live-only member, Tim Kelleher, which was later replaced, in 2011, by Matt McJunkins (better known for being the bassist for A Perfect Circle). Their fourth studio album, Love, Lust, Faith and Dreams, was released in 2013. In 2015, the band have started working on their fifth studio album called America, later released in 2018, which was also the last album that Miličević worked on.

In 2017, 30 Seconds to Mars and Pvris were on a tour together with Muse, called the North American Summer Amphitheatre Tour 2017, touring, as the name suggests, amphitheatres across the USA (and one in Canada).

In 2017, Muse were on a tour together with 30 Seconds to Mars, touring amphitheathers across the USA.