This is a series of almost identical Manson guitars that Matt has been using since March 2015. They are the succesors of the Matt Black I and the Matt Black II - VIII guitars, used between 2012 and 2013. Like all 2015 guitars built by Manson, these guitars feature a truss rod adjuster that is placed just below the end of the neck, and have a slightly different bridge compared to the old Matt Blacks. 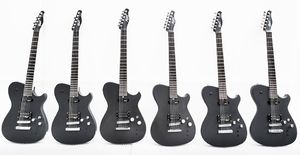 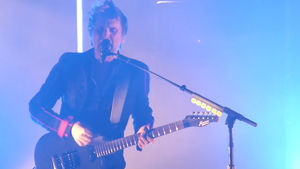 #1 at the premiere at Brighton 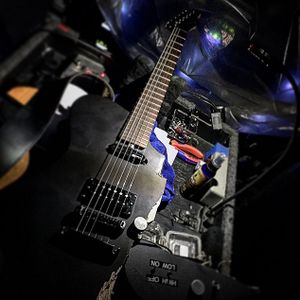 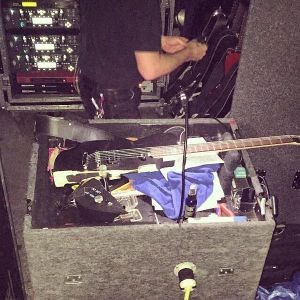 These two guitars are exactly the same as the Manson Matt Black Stealth #1 except for the normal 'silver' custom hardware, instead of the all black custom hardware.

Photos, taken before the Psycho UK Tour started, saw the guitar in Matt's guitar rack. Official photos from Manson Guitar Works led to the assumption, that Matt got two of these guitars delivered (#1 + #2), together with four Cort MBC-1 guitars. The original headstocks of these guitars featured the old Manson logo.

The first guitar (#1) appeared at the Belfast Ulster Hall on the opening night of the 2015 Psycho Tour. On this tour it was used for songs with the guitar tuned to Drop C (Map Of The Problematique, Dead Inside) and DGDGBE (Uprising).

It is unknown at which point #2 was used live for the first time, but it was seen at the Mayan gig together with it's twin, the #1.

As of the Psycho US Tour, Matt used #1 and #2 for various tunings alongside the #3 Matt Black 2.0. He also used them at some of the festival shows, until he destroyed #1 at the Download Festival in 2015.

At some point during the Drones Festivals Tour, the remaining guitar of these twins (labelled as #2) got a new neck, that features blackened custom hardware and a black truss rod adjuster.

During the Drones World Tour in 2015/16 and the North American Summer Amphitheatre tour in 2017, buyers of the VIP tickets were able to visit a MUSEum, where Muse exhibits like old guitars, gear and clothing were on display. One of the guitars was the #1, that he destroyed at Download Festival. 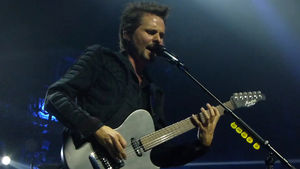 #3 at the Mayan concert

This guitar is exactly the same guitar as #1 and #2, except that the headstock has the new Manson logo on it. It also has the hole for the truss rod adjuster, but doesn't feature the adjuster - this can be seen in the music video for The Handler.

The #3 first appeared in NYC Webster Hall, the first gig of the Psycho US tour in 2015, where it was used for Psycho, Madness and Stockholm Syndrome. At this gig, Matt also used the #1 and #2 Matt Black 2.0 guitars.

They are exactly the same as the #3, but it features a Sustainiac, instead of a Fernandes Sustainer, in the neck pickup position.

The #3 and #4 are Matt's first 6-string guitars with the Sustainiac system (Sustainiac has been fitted before on both of his black glitter 7-string guitars). These guitars also feature a Gotoh nickel bridge. Both feature the old Manson logo on their headstocks.