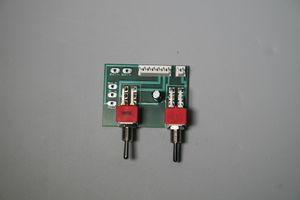 Sustainiac board with On/Off and High/Low switches

The Sustainiac Infinite Sustain System is a very similar product to the Fernandes Sustainer in that it's an electromagnetic pickup which sustains the note.

The Sustainiac is most known for being used by Schecter in their guitars.

Manson Guitars switched over from the Fernandes Sustainer to the Sustainiac System probably due to the size of the unit, with the Sustainiac board taking up less space in the control cavity of the guitar. Some users have also described the overall sound of the pickups being better than the Sustainer.

Matt's first guitar to feature a Sustainiac is the Manson M1D1 Stealth.