A series of almost identical Manson guitars that have been built for Matt in 2015. The M1D1 Stealth guitars are one of the latest additions to Matt's range of X-Y pad guitars, only followed by the Manson M1D1 Blue in 2019. They have been used extensively since 2015, alongside the afforementioned M1D1 Blue, the Manson M1D1 Gloss Black 2.0 and the Manson MB-1 Red Glitter. 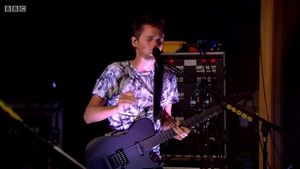 This guitar is one of the new Matt Black Stealth guitars that Matt received in 2015. It features an X-Y Midi Pad with a black framing and a black slide, which makes it the first M1D1 to feature a black instead of a white slide. 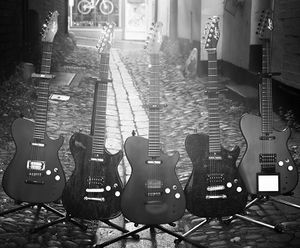 This guitar is very similar to the #1 and was deliverd together with four other new Manson guitars in October 2015.

The differences between the #1 and the #2 are silver instead of blackened custom knobs, white instead of a black Midi pad, a Fernandes Sustainer instead of a Sustainiac, and normal tuners instead of custom ones.

It was first seen at the Paris La Cigale (By Request) gig and later at the Royal Albert Hall gig. 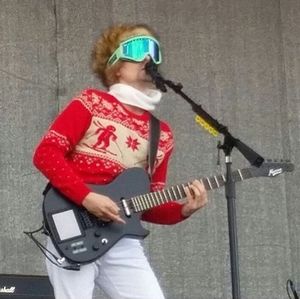 New M1D1 Stealth at the Top of the mountain gig

This guitar was delieverd together with the Manson Xenokroma Bomber and Manson Stealth Bomber. It combines the blackened knobs of the #1 with a white slide of the #2.

It was seen at the Top of the mountain gig.