Take a look at these images: 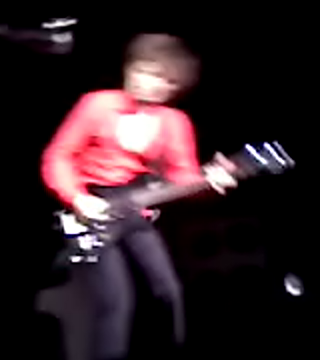 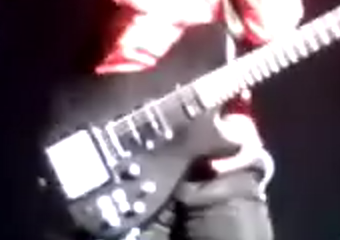 Those controls below/to the right of the Kaoss pad look like the four arranged in a square on the Seattle Manson. --Tene 00:57, 18 August 2008 (BST)

Two things bothered me at this picture.

I think there is also one knob under the kaoss pad - which only Kaoss has one. This one has two humbuckers in the bridge, thought it doesn't really look like at this picture, but > look the distance between neck pickup and bridge pickups - It is shorter distance on the Kaoss one.

And I must admit I'm not sure any more about what I'm seeing - so I opened a thread on the muselive.com http://www.muselive.com/forums.php?m=posts&q=33505 --IIIAliAsIII

Looks like I was right :) Check the topic on muselive.com

I have already edit info in a Kaoss Manson.

Invincible played half step down

Since July 24th 2008, Invincible has been played in the key of B instead of C (half step down). But Matt does not play it with EbAbDbGbBbEb Seattle Manson - he stil plays it with Kaoss. I presume that Matts guitar tech didn't tune his Kaoss Manson half step down - Matt plays it on standard tuned Kaoss, but plays it a half step down (he move his playing one fret down - towards the head), if you know what I mean... and there is no open strings used in this song, so this makes it even more possible.

Kaoss was used for Unnatural selection at the den sep 4th - please see the talk page at Kaosss Manson. --IIIAliAsIII

in the first 30 seconds of the video you can see Matt's guitar, right? Is is Black Midi Manson?

It looks like it's the Kaoss Manson, not the Seattle. I'm pretty sure the guitar in the video has twin bridge pickups, no PowerTune LED, and controls like the Kaoss Manson. --Dyingatheist 19:39, 14 May 2010 (BST)

May I strongly suggest the page name be changed to "Manson Black MIDI" since 'MIDI' is an acronym for 'Musical Instrument Digital Interface', acronyms are always capitalised