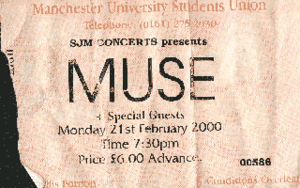 The concert was organised by SJM Concerts.[1][4] This performance was the last known performance of Nishe for eight years, until June 2008 would revive the song for just one performance.

This concert was recorded in lossy (mp3) format and was uploaded online at some point. This recording contains the last known recording of Do We Need This live, the last Nishe recording until June 2008, as well as the last recorded performances of Feeling Good, Overdue, Minimum and Escape for several months. This recording can be heard below.